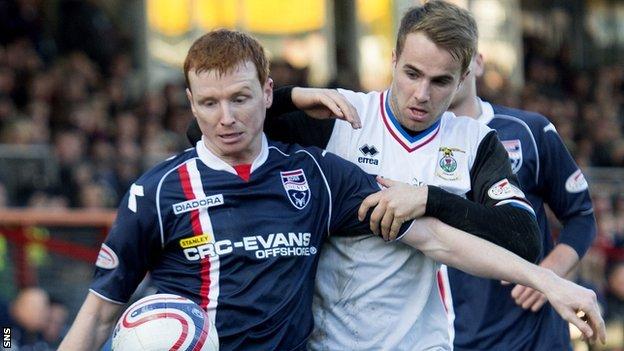 Three matches across Scotland have been called off due to waterlogged pitches.

Wednesday's derby between Ross County and Inverness was called off on New Year's Day.

In the First Division, Partick Thistle's home match against Hamilton and Falkirk v Livingston are both also off due to heavy rainfall.

Saturday's fixture at the stadium, between County and Hearts, was called off shortly before kick-off with the playing surface deemed unplayable.

In the First Division, Firhill was deemed waterlogged after failing a Wednesday morning inspection for Partick Thistle's game against Hamilton, while Falkirk v Livingston failed a mid-morning inspection due to the rain.

A Ross County statement read: "In the face of heavy rain on already saturated ground, all efforts to get the pitch to a playable standard were in vain."

"Ross County would like to apologise to all fans.

"No details on a rescheduled date are available as yet - tickets purchased will be automatically valid for the match whenever it is played, whilst all intact tickets can be exchanged for a full refund."