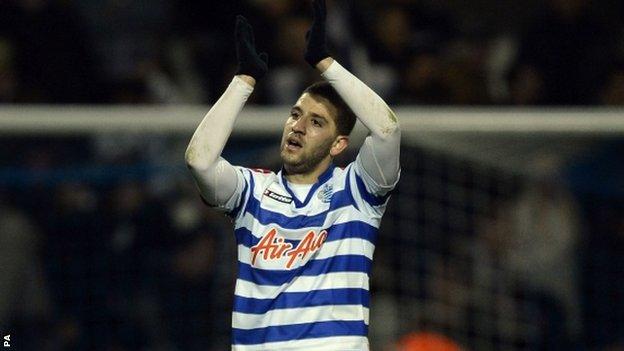 QPR midfielder Adel Taarabt has been left out of Morocco's squad for the Africa Cup of Nations in South Africa.

Taarabt, 23, had said that if selected he wanted to play in the three-week tournament, which starts in January, despite missing key games for QPR.

But Morocco coach Rachid Taoussi claimed in a news conference that Taarabt refused to meet him when he travelled to London to see the player.

However there is no place either for Marouane Chamakh, who has been struggling to force his way into the Arsenal team this season.

Taarabt has been out of favour with the national team in recent time but hoped to have done enough to impress Taoussi, who took charge in the summer.

He is now available for league games at West Ham and Swansea, and home matches against Manchester City and Norwich.

Taarabt is now available for:

Taoussi has named an initial list of 24 players for the tournament, meaning one player will have to be dropped before the finals.

Winger Assaidi, 24, has made just three appearances for Liverpool this season since moving from Heerenveen in the summer and has played nine times for Morocco, scoring one goal.

El Ahmadi also moved from a Dutch club to the Premier League in the summer, the 27-year-old midfielder joining Villa from Feyenoord.

Taarabt, who has scored four goals in 15 international appearances, has been out of favour with Morocco recently, but has been desperate to impress national team coach Rachid Taoussi, who took charge in the summer.

QPR boss Harry Redknapp had asked Taarabt to miss the tournament to help in the battle against relegation from the English top flight.

Morocco play Angola in the second match of the tournament on 19 January before facing debutants Cape Verde and hosts South Africa in their other Group A games.