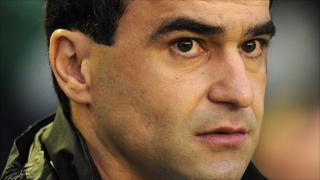 Playing well is not enough - Martinez

Wigan manager Roberto Martinez reveals he is "concerned" by his side's points tally after suffering a 2-1 defeat at Everton.

The setback leaves Wigan in the relegation zone at the half-way point of the season, and Martinez believes that "playing well is not good enough" and says his side "need to win football games" if they are to remain in the Premier League.

The defeat is the Latics' 12th of the season, with four wins and three draws on the board.