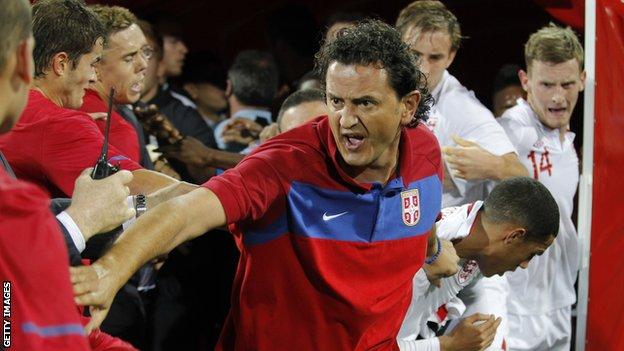 European football governing body Uefa has decided to appeal against sanctions imposed by its own disciplinary body on Serbia and England's Under-21 players.

England's Steven Caulker and Thomas Ince and four players and two coaches from Serbia were banned, after a brawl at the game in Krusevac in October.

Uefa also ordered Serbia to play their next competitive under-21 match behind closed doors and fined them £65,000.

The sanctions have been widely viewed as being too lenient.

The game ended with scuffles over alleged racist chants from Serbian fans towards England players.

A statement on Uefa's website read: "Uefa, via the Uefa disciplinary inspector appointed to the case, has decided to appeal all the sanctions imposed by the Control and Disciplinary Body relating to incidents which took place at the 2013 Uefa European Under-21 Championship play-off second-leg match between Serbia and England on 16 October 2012".

The UEFA disciplinary inspector now has until 8 January to lodge an appeal, the same deadline that applies to any appeals the FA and the Serbian Football Federation may make.

Uefa president Michel Platini had hinted that he might appeal against the sanctions after comparisons in the media with the 100,000 euros (£80,000) fine Denmark's Nicklas Bendtner received after revealing a sponsor's logo on his underwear during a Euro 2012 game.

England alleged that racist chants were aimed at England's Danny Rose, which sparked the incident after England's 1-0 qualifying win. Rose claimed he had been subjected to racist taunts throughout the game.

The Football Association has already said it will appeal against Ince and Caulker's bans of one and two games respectively. The banned Serbia players will miss between two and four games each.

In the aftermath, two Serbia coaches were banned from football for two years for their part in the brawl.

In 2007, Serbia were fine £16,000 for a similar offence in an under-21 international in the Netherlands in which England defender Nedum Onuoha was racially abused.