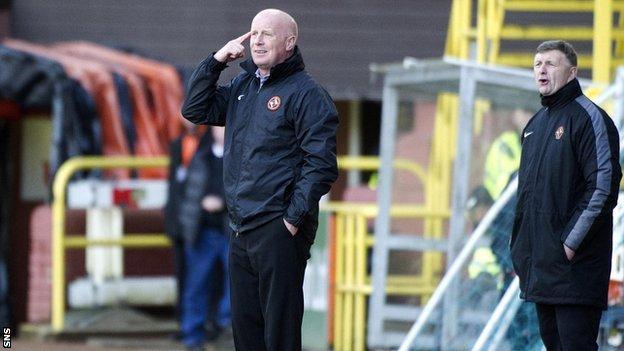 "I am disappointed because I feel it is two points dropped today," said the Tannadice boss, whose side have won only two of their 10 home league games.

"I look at the points we've dropped and I think we should be 10 points better off than we actually are, which would mean we are sitting in second place.

United now sit seventh in the Scottish Premier League after the early kick-off on Boxing Day.

Their last home league win came in August but their away form is better, with four wins from nine matches.

Central defender Gavin Gunning put the Terrors ahead after only two minutes but they failed to extend their lead in the first half and two minutes after the interval were pegged back when Gunning's defensive partner Brian McLean diverted Peter Pawlett's cross into his own net.

"We started exceptionally well. Gavin Gunning could have had a hat-trick of headers and Rudi Skacel had one kicked off the line," Houston told BBC Radio Scotland.

"We should have been well in front going into the interval.

"In the second half St Johnstone started much better and got their goal and then took over for 10 minutes.

"In the last 20-25 minutes we were on the front foot and we were the team that looked the more likely to score.

"I am really pleased with the way we played some good football but we are not killing teams off."

Houston replaced short-term signing Skacel with Richie Ryan with 18 minutes to go as the Czech midfielder, playing wide on the right, again failed to reproduce the form that made him such a favourite at Hearts.

"We ask him to go and pick up spaces in behind. That's where he has played in his career," explained Houston.

"It's just unfortunate. It's been a couple of games in a couple of days. Maybe it's too much for some of them. They looked tired.

"He is only here until the last day in January. We will discuss the options in the next couple of weeks, whether he wants to stay first and foremost.

"We haven't really asked the question yet but he might have his agent touting round for more money because he is not on the money he was used to at Hearts.

"We'll wait and see. He's a good player, a good professional. He works very hard in the games but he's just missing a few goals."