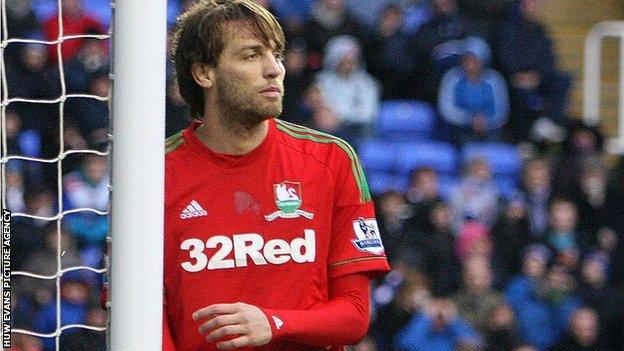 Swansea City will be without top scorer Michu for Saturday's Premier League visit to Fulham.

The Spaniard limped off with an ankle ligament injury towards the end of the scoreless draw at Reading on Boxing Day.

He could be fit for Tuesday's home game against Aston Villa, according to manager Michael Laudrup.

Pablo Hernandez and Angel Rangel could play, though, after recovering from injury.

Midfielder Hernandez has been sidelined by a thigh injury since the 3-1 home win over West Brom on 29 November.

Defender Rangel has missed the last three games with an ankle knock.

Michu has scored 13 Premier League goals this season - the same as Manchester United striker Robin van Persie - since joining Swansea for £2m during the summer.

Laudrup is relieved the injury is not as serious as at first feared, and expects his talisman to make a rapid recovery.

Swansea drew for the second game in a row on Boxing Day, and Laudrup said: "I'm more happy with the performance than the result.

"We dominated for 75 minutes and then in the last 15 minutes there were a lot of set pieces and Reading created some problems," he said.

"What was very important for me was the reaction and performance from the team after the Manchester United match.

"Everyone talks about that game and you can only do well, but three days later you play the bottom team in an away game. I was pleased with what I saw."

The result leaves Swansea in ninth place, and well ahead of their manager's expectations.

"To reach the first half of the season with 25 points is really great," said Laudrup.

"But we can't stop. From now to the beginning of February we have so many games.

"The next stage to reflect is when we reach 40 points, then we'll see from there."