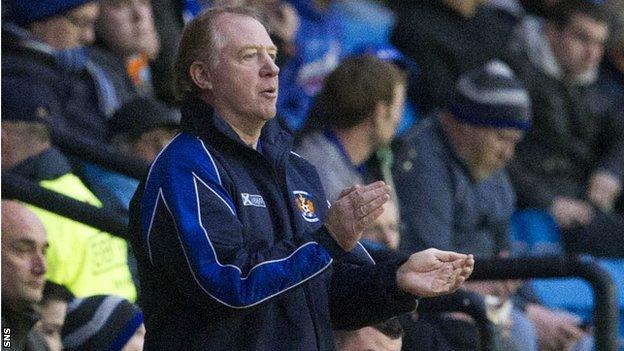 Assistant manager Jimmy Nicholl was relieved to hear the final whistle after watching Kilmarnock hang on to beat Hearts 1-0 at Rugby Park.

"In the first half our composure was good but in the second half it was waves of attack," said Nicholl.

"It was all rushed clearances. They put us under pressure and they kept coming back and we couldn't get out."

The match was decided by Liam Kelly's converted penalty midway through the first half, the result of an Andy Webster foul on James Dayton.

Nicholl, who kept in touch with manager Kenny Shiels in the stand while he served the third and final match of his touchline ban, admitted the home side were under the cosh for most of the second half as they clung on for the three points.

"It was all about winning a game of football and the only way they were going to do that was by showing a real spirit and by fighting their corner and doing their jobs," he continued.

"It wasn't a display that the manager would like but sometimes needs must.

"In the first half we did well. Big Cillian Sheridan did a shift for us wide on the right, Dayton created the penalty and [Paul] Heffernan was good - things were coming up to him and his control was good, he was holding it up and bringing others in.

"It was a hard-fought second half but we had got ourselves in a good position.

"I would love to get a performance at home and dominate from start to finish but the game is not as simple as that."

Since losing 3-1 to Celtic in Ayrshire on 8 December, Kilmarnock have won at Aberdeen and drawn at home to Hibernian before the defeat of Hearts.

"That's seven points out of nine and we are looking to go on a wee run. We have two away games coming up," said Nicholl ahead of matches at Motherwell and St Mirren.

"We have won away from home before but it is going to be difficult - that was a good result for Motherwell today [beating Aberdeen 4-1]."