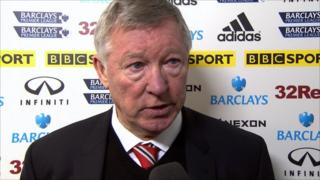 Ferguson describes the result as a "championship performance" but admits United's tendency to concede goals this season consistently puts the team under "tremendous pressure".

The victory puts Ferguson's side seven points clear of local rivals and champions Manchester City at the top of the table.