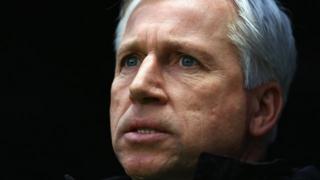 Newcastle coach Alan Pardew says his players were "unlucky" not to come away with any points after their 4-3 Premier League loss at Manchester United.

The Magpies led the match on three occasions but could not hold on as the hosts put them under pressure in the final minutes of the game, with Javier Hernandez eventually sliding home a 90th-minute winner.

Pardew adds that he is disappointed that his players conceded such "poor" goals but feels his side gave a good account of themselves.