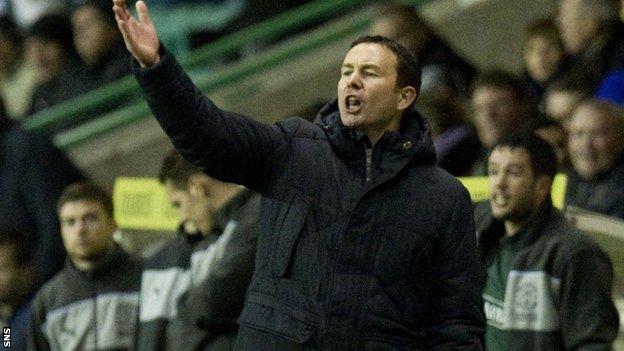 Ross County manager Derek Adams reckons his side's away victory against Hibernian is another sign of how far they have come.

The Dingwall team increased the gap between themselves and bottom-placed Dundee to nine points.

"There's been a massive turnaround over the last five to six years," he said.

Adams was especially pleased by the role of captain Richard Brittain, who scored the solitary goal that gave his side their fourth league victory of the season.

"It was a good move actually. We passed the ball well and Richie's got a header at the near post.

"It's not like him, scoring a header but he's an important player and it was great for the whole team."

County had not won in the Scottish Premier League since beating Aberdeen 2-1 at the beginning of November.

But Adams knew his side had a good record against the Easter Road outfit.

"We've come here in the Scottish Cup [2009-10] and drawn and won up at Victoria Park twice now, so we enjoy playing here," he said.

"It's a terrific venue and we're delighted with the three points tonight.

"We didn't really let Hibernian create much in the game.

"It was good to come here and win because they've got a good home record here this season."

One negative for Adams to contend with was the injury suffered by midfielder Stuart Kettlewell, who had to be replaced by Paul Lawson soon after the interval.

"He's pulled his hamstring and he'll be out for probably four to six weeks now, which is going to be a big miss for us but it gives someone else an opportunity," added Adams.