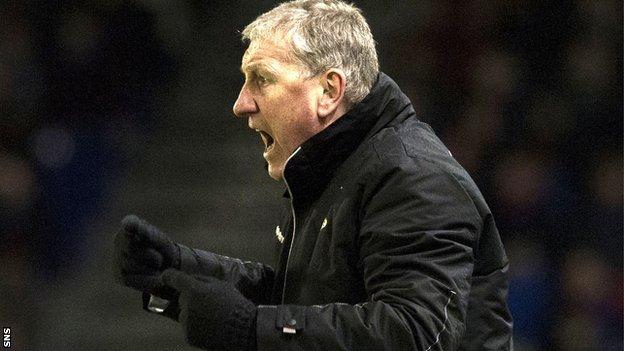 Inverness CT manager Terry Butcher was happy with a point in a frenetic match with St Mirren.

"We could've lost it at the end so I'm very happy with a point," Butcher told BBC Scotland.

"It keeps us in second place and our goal difference is very good as well, so it's not too bad."

The visitors took an early lead when Dougie Imrie smashed a 20-yard drive past Antonio Reguero.

However, Andrew Shinnie crashed a sensational strike into the top corner of the net to level for the home side.

Steven Thompson restored the visitors' advantage with a header from a Gary Teale cross, but Richie Foran grabbed a second leveller for the Highlanders.

"It was a very open game - more like a basketball match or a table-tennis match where the ball's fizzed from one end to the other," said Butcher.

"At 2-2 I thought well let's go and win it now and we couldn't quite get that goal.

"We attacked and pushed men forward and St Mirren just thought let's have a go as well - and they certainly did.

"Going forward I thought we were sensational at times."

The form of the Highland side has garnered interest in some of Butcher's high-performing players.

Naturally, Butcher hopes to fend off anyone trying to prize away his top assets.

"Let them admire my players from afar and let's get through January into February," said Butcher.

"At the start of the season if you'd have said at the January transfer window there's going to be a lot of clubs that are interested in your players, then you'd have said we must be doing quite well."