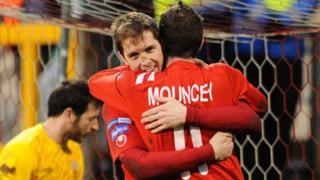 Glenavon's Conor Hagan was sent off for a 34th-minute challenge on Richard Lecky which resulted in a penalty but Andy Coleman saved Neil McCafferty's spot-kick.

However, left-back Ross Redman jinked his way through the Glenavon defence to open the scoring on 42 minutes.

Redman's cross then set up Lecky's 49th-minute headed goal for the Ports.