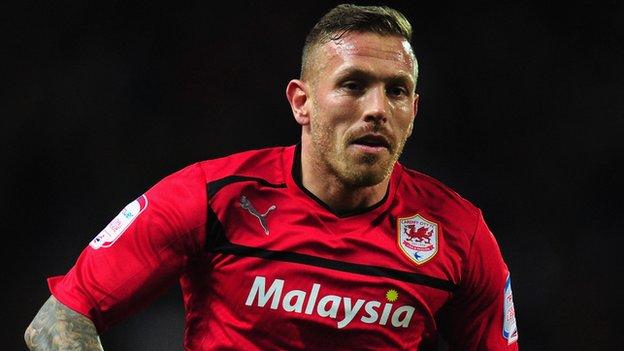 Malky Mackay said the performances of Craig Bellamy epitomise the spirit within the squad that has taken Cardiff City to the top of the Championship.

Boxing Day's coming after a win at another promotion rival in Leicester, has seen Cardiff open a five-point lead.

"The boy loves football and that's what I love more than anything else," said Cardiff manager Mackay.

Bellamy scored the only goal in last weekend's win at Leicester and again caught the eye as Cardiff came from a goal down to beat Palace.

But Mackay says that the Wales striker's will to win is mirrored in the rest of the Bluebirds squad.

For them to gel the way they have can only be down to their own personalities, their own lack of ego

"He's here and he's involved with a group of players... that are doing the same thing, they're all working hard together - that certainly helps in your cause to beat teams.

"I'm really proud of the way they work for each other and the complete lack of ego at the training ground among them.

"They've gelled together, new players coming in again this year and it's not easy, it's a huge turnaround at a football club in 18 months in terms of that playing squad.

"For them to gel the way they have can only be down to their own personalities, their own lack of ego and their work ethic."

Mackay's next big test is Saturday's visit to the Cardiff City Stadium of Millwall, who sit just outside the play-off places on goal difference.

Cardiff will complete their packed holiday period fixture list with a trip to Birmingham City on New Year's Day.