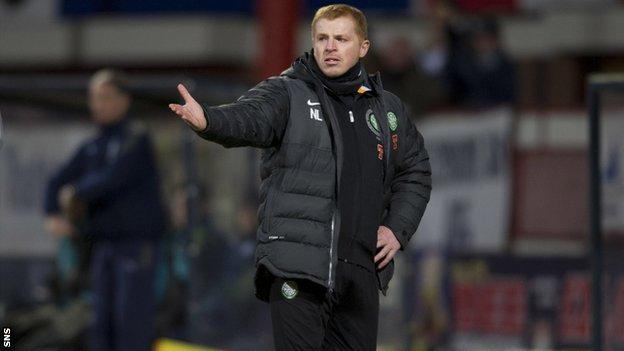 Two excellent goals from Georgios Samaras and Gary Hooper defeated Dundee, but it was not plain sailing.

"We were a bit tippy-tappy for 10 minutes and we were inviting trouble on a difficult pitch," said Lennon

"Dundee tried to press us in the middle third and sometimes you have to go back to front or play down the sides, which we did for the second goal."

The visitors dominated the first half but with only the fantastic overhead kick from Samaras to show for it.

That meant Dundee came out fighting at the start of the second, and went extremely close to equalising through a Colin Nish header which Fraser Forster clawed away.

"I had to rely on my goalkeeper to pull off another world-class save at a very vital time in the game when we were only a goal ahead," Lennon told BBC Scotland.

"To keep the clean-sheet, I'm delighted with that, and to go seven [points] clear with a game in hand is a great position to be in now.

"Overall I'm very pleased - I just want them to maintain standards and they can't always do that, so they've ground out a good win tonight."

Celtic fans will have been encouraged by the introduction of James Forrest, a second-half substitute.

"At the minute he's still trying to find his full fitness, and without any natural width in the team there's a bit of an imbalance to the way we're playing at times," said Lennon.

"But when he comes on you can see the shape and the players looking happier - and obviously it gives us some extra thrust as well."

Charlie Mulgrew's set-pieces caused all sorts of problems for Dundee's defence in the first half.

Therefore, when Mikael Lustig came out in his place for the second half there was some puzzlement.

"That was an enforced change," said Lennon

"Charlie's damaged a rib or he's maybe pulled a muscle in the rib area.

"He's finding it hard to breathe so he'll have to be assessed."