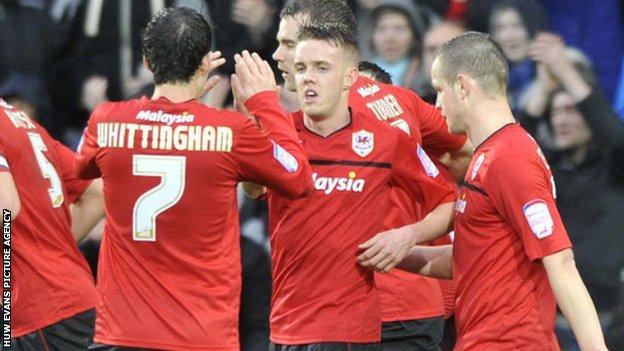 Cardiff City's Craig Noone says there is no talk of promotion at the Bluebirds as they sit on top of the Championship going into the new year.

Cardiff opened a five point lead with a 2-1 win over fourth-placed Crystal Palace on Boxing Day.

And even though the team top at Christmas has been promoted in each of the past five seasons, Noone says the players are taking nothing for granted.

"I won't be mentioning it. We'll just be taking it game by game," he said.

"I think we've got our heads screwed on.

"We know what we want and that's just to keep going, take it game by game and keep getting the results.

"We don't really think about stuff too soon."

Cardiff City have another chance to inflict some damage on promotion rivals when seventh placed Millwall visit on Saturday.

Their Christmas has so far yielded maximum points with a 1-0 win at Leicester on 22 December and Boxing Day's victory against Palace.

"It was a massive win and to go one-nil down as well, we showed a lot of character to pull it back and get the win," said Noone, whose goal started the comeback against Palace.

"The Leicester result was great and coming back here we had to put it right because obviously we slipped a bit against Peterborough."

The 2-1 home defeat against struggling Peterborough remains the Bluebirds' only glitch during a productive December, and their only defeat in nine League matches.