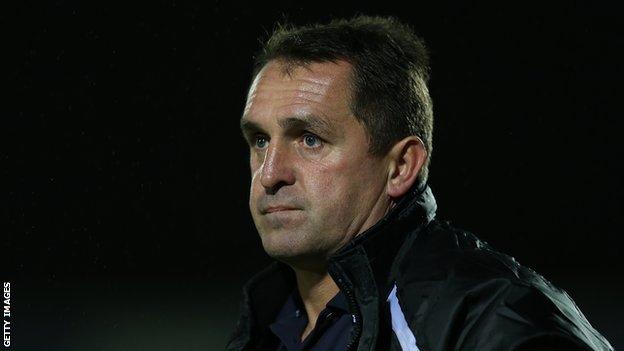 Gillingham manager Martin Allen believes the club's fans are welcome to share their feelings after some boos following their 1-0 defeat to Barnet.

League Two leaders Gills have won once in five league games and are without a win at Priestfield in over a month.

"They pay their money and they're entitled to their opinion," Allen told BBC Radio Kent.

"The supporters have given us support so if you don't play well, you have to take it on the chin."

When you pay, you can say what you like

Port Vale's win at Rotherham means Gillingham's lead at the top of League Two has been cut to two points.

Jake Hyde's 19th minute strike for Barnet condemned the Gills to their third defeat at home in the league this season and Allen conceded their first-half showing was sub-standard.

"We'd all be leaving saying exactly the same as me," he continued.

"When you pay, you can say what you like. They pay their money. They want to be entertained."

Allen also confirmed he had some finances at his disposal to recruit some fresh faces when the transfer window re-opens in January.

"It's been well documented," he said. "We missed out by one minute on the transfer deadline day of a very important position.

"There are one or two other places we are looking to improve."