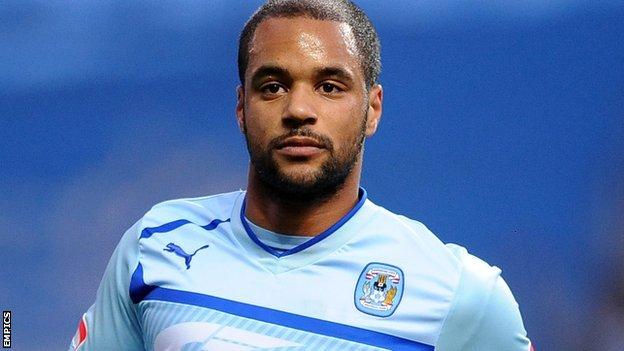 Coventry City manager Mark Robins has vowed to "compete" to keep hold of top scorer David McGoldrick when his loan at the Ricoh Arena expires next week.

But Robins knows the on-loan Nottingham Forest forward's form in hitting 18 goals for the Sky Blues has alerted other clubs higher up.

"There are things we can do to compete. We'll fight as hard as we can," Robins told BBC Coventry & Warwickshire.

"But there's a point where we may have to accept defeat."

"It's a case of where a player wants to play their football and what package they're going to be receiving from a club possibly in a higher division.

"He may already have made a decision and that's up to Dave.

"But, if the worst comes to the worst, and he does go somewhere else, then we'll shake his hand and wish him all the best because he's been magnificent for us."

But the 25-year-old former Notts County, Southampton, Bournemouth, Port Vale and Sheffield Wednesday striker may now have just one game left as a Sky Blues player.

He will miss Saturday's trip to MK Dons through suspension after his fifth yellow card of the season in the 3-1 Boxing Day win at Stevenage, for ripping of his shirt in celebration of his late victory-sealing goal.

"It's a pain in the neck for me and a travesty," added Robins. "It's not a great rule."

Robins has an obvious replacement lined up, in Leon Clarke, if he does lose McGoldrick, League One's 16-goal leading marksman.

Charlton Athletic striker Clarke, who hit 11 goals earlier this season during a three-month loan spell at Scunthorpe (including two against the Sky Blues in their last defeat back on 10 November), has already arrived at the Ricoh on trial, with a view to completing a January move.

Meanwhile, a further announcement is not now expected until the New Year with regard to Coventry's future at the Ricoh.

Arena Coventry Limited claim that the Sky Blues owe £1.1m in rent arrears and had given them until Boxing Day to pay up - or face a winding-up petition. But that deadline has now been extended until 2 January.