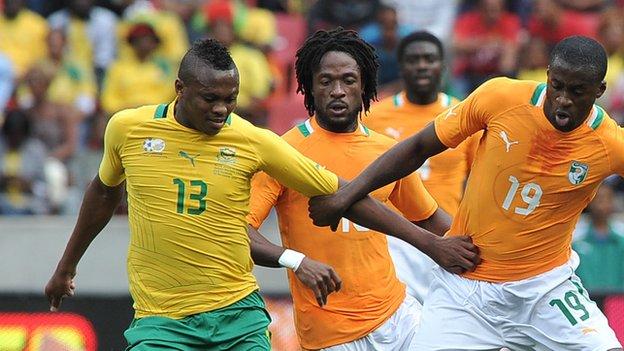 Madigage was killed in a road accident in October, only three months after being appointed to his role by coach Gordon Igesund.

Crystal Palace star Dikgacoi told BBC Sport: "Tommy meant a lot to some of us because he improved us as players.

"It would be perfect if we could win the tournament and dedicate it to him."

Madigage was a popular midfielder who won four caps for his country as a player before helping SuperSport United to win three successive Premier Soccer League trophies as assistant to Gavin Hunt.

Dikgacoi added: "I know some of us have taken his death quite badly. That will be really inspirational for us every time we step onto the pitch."

The 28-year-old is due to play his last match for Championship side Palace on New Year's Day against Wolves before flying to Johannesburg to link up with the rest of the Bafana squad.

He could miss up to five league matches if tournament hosts South Africa progress to the final on 10 February but he is confident Ian Holloway's side can keep up their promotion bid without him.

"I know we've got good players around the team so I don't think it's going to affect us too much," Dikgacoi said.

"We have players who can come and fill up the space. It will be good if I can come back and the team are in the same position or even top of the table.

"If we (South Africa) do well in the tournament, obviously I'm going to be away for quite some time but everyone is prepared. I know the coach has been making plans around that situation."

Bafana beat Malawi 3-1 last week with an experimental team of PSL-based players and face friendlies with Norway and Algeria in the build-up to their opening game against Cape Verde on 19 January 19.

Dikgacoi expects them to build up some momentum in the meantime to ensure the home supporters are right behind Igesund's squad.

"The win against Malawi gives us hope and motivation," he said.

"We've got a couple of games coming up and if we can do well and win those matches it will give us a morale boost. This time is crucial for us and the friendlies will give the coach a good indication of who is in good shape for the tournament."