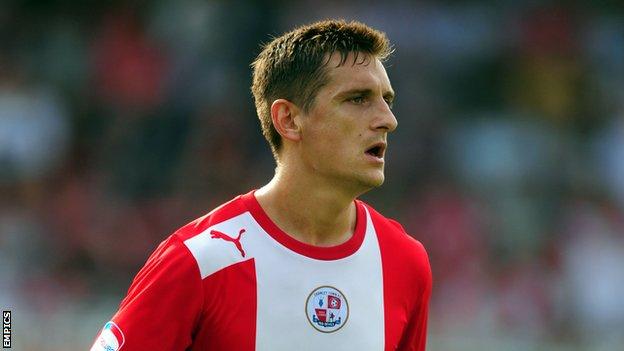 Crawley Town utility player Shaun Cooper was delighted to return to action after over three months out through injury.

The 29-year-old came off the bench in the 2-1 win at Portsmouth on Boxing Day after time out with a groin problem.

He told BBC Sussex: "It was nice to come on. It has been a long time and it has been incredibly frustrating.

Obviously you want to play as much as you can but I'm not deluded. I have got a long way to go but I am going to work hard to get there

"It has been a niggling one. It gets you down but it is a test of character and you've got to keep going."

Cooper, who last featured in the draw at Colchester in mid-September, came on with four minutes of normal time left at Fratton Park.

"Obviously you want to play as much as you can but I'm not deluded," he added.

"I do need more time and fitness. A reserve game would be nice but the weather has killed a few.

"Any minutes I can get I am grateful for. I have got a long way to go but I am going to work hard to get there. Hopefully I can kick on from here."

Crawley's win over Portsmouth, their second victory in three league games, moved them up to eighth in the League One table and one point off the play-off places.

"Personally, it's frustrating that I haven't been involved more but I'm really happy the lads have gone on and done as well as they have," Cooper said.

"Let's hope we can keep progressing and climb back up the league. There are plenty of teams which can challenge for the play-offs.

"Consistency is the key, as it is with any team in any league."

Crawley's next match is away to AFC Bournemouth, who are level on points but one place above them in the table thanks to goal difference.

Cooper played 243 times during a seven-year spell with the Cherries before departing in the summer and joining Crawley on a free transfer.

Bournemouth are currently on a 14-game unbeaten run in all competitions since Eddie Howe returned for a second spell in charge of the side in October.

"I'm looking forward to going back there," Cooper said.

"They are flying at the moment. I'm pleased for them but it would be good to get a win over them.

"I played under Eddie and he is a great manager.

"I think getting him back is the best thing the chairman [Eddie Mitchell] has ever done because the results have shown what he is capable of.

"He has had great success and I tip them for automatic promotion. I hope they keep going apart from when we play them."