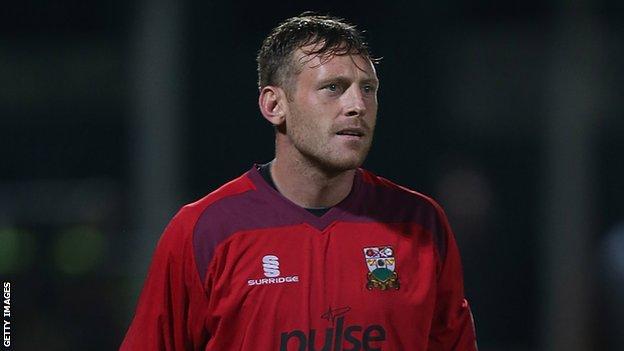 Barnet goalkeeper Graham Stack says their win at leaders Gillingham on Boxing Day was down to a team effort.

The Bees won 1-0 at Priestfield to move three points clear of the League Two relegation zone.

He told BBC London 94.9: "It was a credit to the way we prepared ourselves, set up and our spirit.

"From the centre-backs to the boys up front, everyone worked their socks off. It's credit to the lads to come out with a clean sheet."

"Priestfield is a very hard place to come," the 31-year-old added.

It's all about progress and getting the points in. We are now out of the bottom but we don't have to change everything we do

[Gillingham boss] Martin Allen sets his side out very hard to beat. They are very direct and have got goals throughout the team.

"When you go 1-0 up, you know the second half is going to be a different story.

"Martin Allen got them right up for it and they were very energetic in the second half.

"We were on the back foot and didn't create a great deal. Fortunately I was able to make saves when called upon."

"We believed in ourselves and that we could do it," Davids told BBC London 94.9.

"It's all about progress and getting the points in. Who we play against doesn't matter. We need the points.

"We are now out of the bottom but we don't have to change everything we do.

"We will focus on progression and hope we will get a steady flow of points and we'll be safe a couple of games before the end of the season."