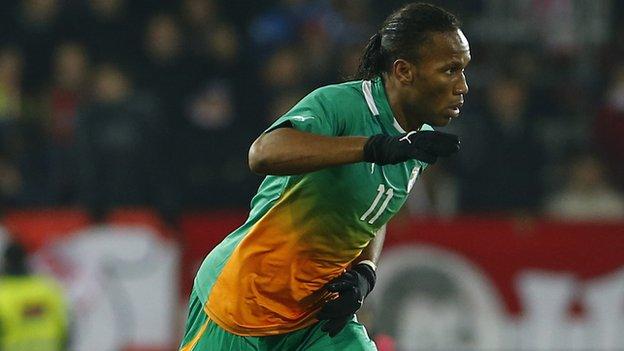 Didier Drogba will lead a vastly experienced Ivory Coast at the Africa Cup of Nations next month as part of a squad that includes a recall for Wigan Athletic striker Arouna Kone.

The well-travelled Kone competed at the Nations Cup finals in 2006 and 2008.

He is back along with Spanish-based midfielder Romaric, who has also missed out in recent years.

Coach Sabri Lamouchi named a squad with just six changes from the last edition, where the Ivorians finished runners-up.

Third-choice goalkeeper Badra Ali Sangare is the only uncapped player in the squad.

Kone is one of six players at English Premier League sides have been included in the squad.

Champions Manchester City are hardest hit, losing three players in the Toure brothers and Abdul Razak, while Arsenal will be without striker Gervinho and Newcastle without Cheick Tiote.

The Ivorians are only the second of the 16 finalists to announce their final 23-man squad for the tournament in South Africa, which starts on 19 January and goes through to 10 February.

All squads must be finalised 10 days before the opening match.

Ivory Coast are to hold a 10-day training camp in Abu Dhabi from 6-16 January and play a friendly against Egypt there on 14 January before heading to South Africa, where they are top seeds in Group D alongside Algeria, Togo and Tunisia.