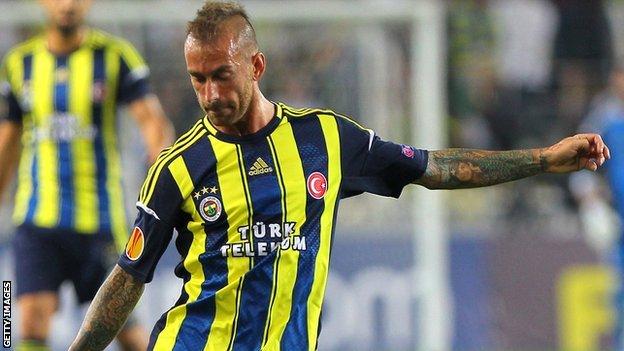 Former Liverpool and Chelsea midfielder Raul Meireles has had an 11-match ban reduced to four matches.

The Fenerbahce player, 29, appealed after being accused of spitting at the referee following his red card in the Istanbul derby with Galatasaray.

The Turkish Football Federation ruled it was "physically impossible" for him to have spat while berating the referee because he was speaking all the time.

He will still have to serve a four-game ban for verbal abuse of the referee.

Meireles in the Premier League

Meireles had vehemently denied the accusations and vowed to prove his innocence.

The midfielder spent two seasons in the Premier League, joining Liverpool from Porto following the 2010 World Cup, before handing in a transfer request and

He left Stamford Bridge in September to

The 2-1 defeat by Galatasaray was only the second time that Meireles had lost in 14 appearances for Fenerbahce.