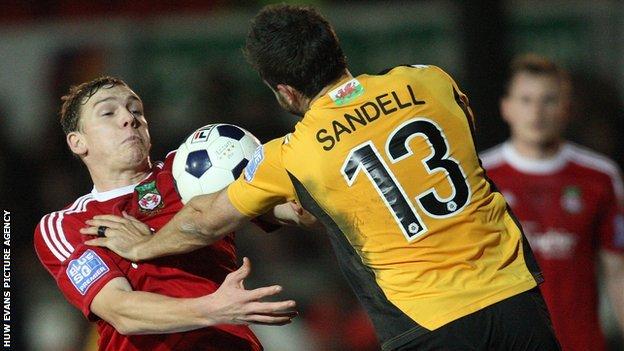 Wrexham moved above Grimsby at the top of the Blue Square Bet Premier table after a 1-1 draw with Newport.

The hosts could have taken the lead only for Joslain Mayebi to come to Wrexham's rescue by saving Andy Sandell's penalty.

Danny Wright put the visitors ahead in the 34th minute with his 10th league goal of the season.

But promotion hopefuls Newport fought back and levelled through Max Porter's low strike from the edge of the area.

A draw means Wrexham leapfrog Grimsby in the league table, although the two sides are level on points with Lincolnshire side, who play Hereford on Saturday, having played a game less.

Newport are a point adrift of the leaders and the second-half fightback at Rodney Parade will be of some consolation for a team which suffered a 5-0 defeat by fellow promotion chasers Forest Green on New Year's Day.

"It was a fantastic advert for the league. The other thing is it was two teams that were at the right end of the table for the right reasons.

"If I'm honest I'm disappointed we didn't take all three points. We created some good chances, missed a penalty, hit the crossbar at the end, so it's a great response from our players."

"It felt about three hours long, but a real advert for our league. There was punch after punch coming our way and we gave as good as we got.

"But probably a draw was fairly fair, but we could have nicked it."