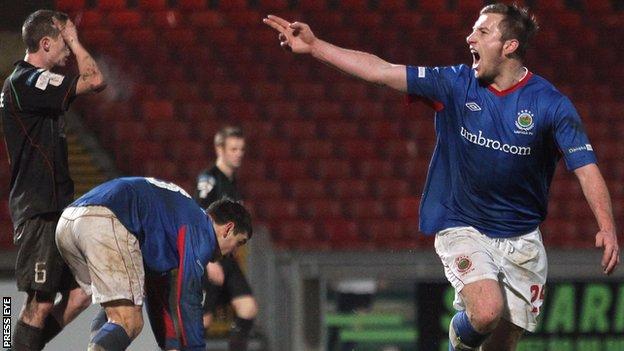 Linfield striker Mark McAllister is an injury doubt ahead of Saturday's Premiership game at Glenavon.

The former Dungannon forward, who scored in the Boxing Day win over Glentoran, picked up a groin strain during training on Thursday night.

Glenavon will be without the suspended Conor Hagan following his dismissal against Portadown on Wednesday.

Cliftonville boss Tommy Breslin reports no fresh injury concerns as the leaders prepare to take on Dungannon Swifts at Solitude.

Michael McNamee presents coverage of the games on Saturday Sportsound, starting at 14:00 GMT.

Joel Taggart will be joined by Tony Gorman for commentary on Ballinamallard Utd v Crusaders game at Ferney Park.

Michael Hammond and Bobby Carlisle are at Shamrock Park for Portadown v Coleraine, while there are reports from the other four matches.

The Reds moved nine points clear of Crusaders after beating their north Belfast rivals 1-0 on Boxing.

Crusaders make the long trip to face Ballinamallard with boss Stephen Baxter confident his side can still win the title.

"There's still a long way to go in this league and we'll be fighting for every point," said Baxter.

"I don't get too anxious about tables and you win nothing at this time of year.

"Our focus now is on a very tough game against Ballinamallard on Saturday followed by another tough encounter with Portadown."

Another player back from a ban is Portadown forward Darren Murray and he is available for the Shamrock Park meeting with Coleraine.

Ballymena will aim to halt a run of six straight league defeats when they play basement boys Lisburn Distillery at the Showgrounds.

United have Tony Kane returning from a ban although Alan Davidson (ribs) is a doubt, while Distillery's Dominic Melly remains suspended.

The Sky Blues will be boosted by the signing of striker Shane Dolan, who has agreed to join the Showgrounds club from Donegal Celtic on an 18-month contract.