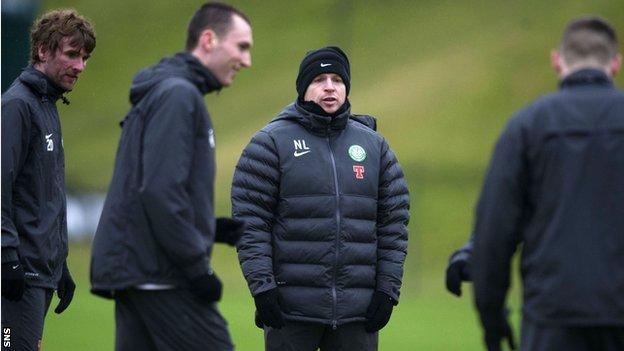 Celtic manager Neil Lennon says his players have no reason to want to leave during the January transfer window.

Lennon's side lead the Scottish Premier League and are still in domestic and European cup competitions.

And he said: "Why would you want to give that up now, having worked so hard to get there in the first place?

"We are looking to enhance the squad if we can but in terms of our big players, there'll be no encouragement towards any club whatsoever."

The club remain "heavily involved" in negotiating contract extensions for players like Gary Hooper and Victor Wanyama but Lennon is unsure how many additions he will be able to make next month.

"January is obviously a time where clubs want to improve their squads but other clubs don't want to let their players go so I'm not too sure how much business is going to be done in January," he explained.

"Why go now when maybe you can go later on down the line? We're in four competitions and we're in the last 16 of the Champions League.

"Maybe the players don't want to go anyway. The majority of them seem to be very, very happy here.

"In four or five months time in the summer then maybe they can reflect on the season and look to the future then but, for the time being, they might never get this opportunity again."

Lennon admitted fringe players may be allowed to go on loan in the New Year but described reports linking Paddy McCourt with a move to Crystal Palace as "just speculation".