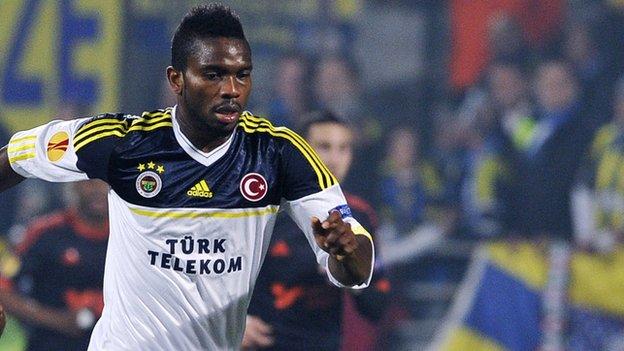 Nigeria captain Joseph Yobo has lashed out at Peter Odemwingie after the West Brom striker said the country does not have a team leader.

Odemwingie said via Twitter that recent Super Eagles captains have only looked out for themselves.

Since the outburst, Odemwingie has been dropped from the squad for next month's Africa Cup of Nations.

"Osaze has been reckless, disrespectful to most people, He's not a kid, he should grow," said Yobo.

"We cannot continue to babysit him. He is responsible for his problems," Yobo told Nigerian radio station Brila FM.

"This is not the first time he has been disrespectful. He is fighting all the coaches and at the World Cup he also disrespected me and he later apologised.

"He is not the (Lionel) Messi or (Cristiano) Ronaldo of Nigeria. He should look at himself in the mirror."

The Fenerbache star gave credit to coach Stephen Keshi for the provisional squad he picked for the upcoming tournament in South Africa, while admitting that he was surprised Obafemi Martins, Osaze, Taye Taiwo and Kalu Uche were not considered.

"I will give him credit for the squad. He will score 95% even though one or two should have been there," said the former Everton defender.

"I'm sure he would have had some sleepless nights in selecting his team.

"Kalu Uche, Martins, Taye and Osaze not being there was a surprise but the coach must have his reasons and he cannot call everybody."

Yobo also admitted that at 32, "this is maybe my last Nations Cup".

"We have to allow younger players to get their chance," said the central defender.