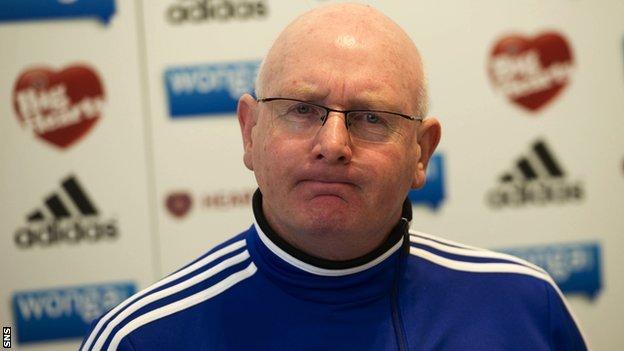 Hearts manager John McGlynn does not want to lose defenders like Ryan McGowan in January but accepts the club may have to listen to offers.

McGowan, who is attracting interest from South East Asia, is out of contract in the summer.

"They're out of contract in the summer and the football club is not in a position to knock back good offers if they come in."

Though Hearts have agreed settlements over tax bills, the club is still facing a shortfall with a recent share issue falling short of the targeted fundraising.

"Some players will probably go, if not in January, then at the end of the season," explained McGlynn.

"We're going to have to go through a transitional period right now and another one in the summer. That's how it will be.

"I would like as many players to stay as possible because that would give me the best chance to do my job best.

"I wouldn't want to lose defenders because that's probably the strongest part of our team, but it may be that these are the players that are sought after most by others.

"I just need to deal with that issue as I have done with every other issue."

McGlynn admits Hearts are facing "probably the most difficult time" but insists his expectations of what the club could achieve on the park are being met.

"I came here with the expectation to be in semi-finals and to be competing at the top end of that table; it's kind of living up to expectations," added the former Raith Rovers boss.

"I don't think they [Hearts] have ever had a transfer embargo in the past or been so close to a winding-up order.

"It's a big challenge. This is a great football club and the players have been fantastic.

"If we have to put more younger players into the team then fair enough. That was my brief - to come here and try to bring through young players."