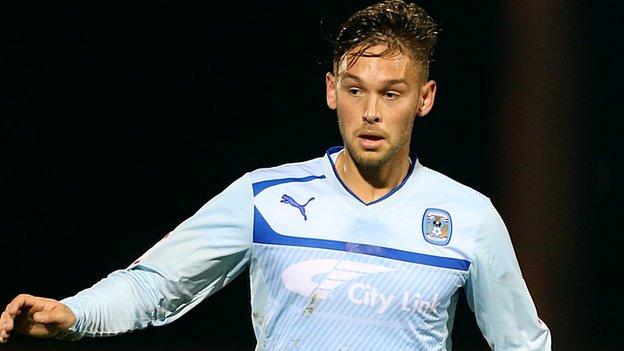 Coventry have extended Derby midfielder James Bailey's loan at the Ricoh Arena until the end of the season.

But boss Mark Robins has negotiated to keep the 24-year-old former Crewe man.

Bailey, who joined Derby in May 2010 along with John Brayford in a seven-figure double deal, became Robins' fourth signing in five days when he arrived at the Ricoh back in September.

"He's shown in his time with us the contribution he can make. I hope now that James can continue to have the kind of impact he's already shown."

After missing three months of last season with an ankle injury, Bailey, who can play in midfield or at right-back, reclaimed his place in December, but then made only two more starts from mid-January onwards - and he remained out of favour under Nigel Clough this term prior to his move to the Ricoh.

Having now gone unbeaten in 10 games to climb to ninth in League One, victory for Coventry on New Year's Day could even lift them into the play-off zone - if MK Dons and Crawley both fail to win.

The pursuit of Bailey is part of a whole package of deals that Sky Blues boss Robins hopes to conclude come the new year once the club have resolved their future at the Ricoh.

Arena Coventry Limited, the club's landlords, claim that the Sky Blues owe £1.1m in rent arrears and had given them until Boxing Day to pay up - or face a winding-up petition.

That deadline has now been extended until 2 January, after which Robins is keen to get the green light to extend the loans of Sunderland defender Blair Adams and top scorer David McGoldrick from Nottingham Forest, as well as also tying up the signing of Charlton Athletic striker Leon Clarke, who is currently there on trial.