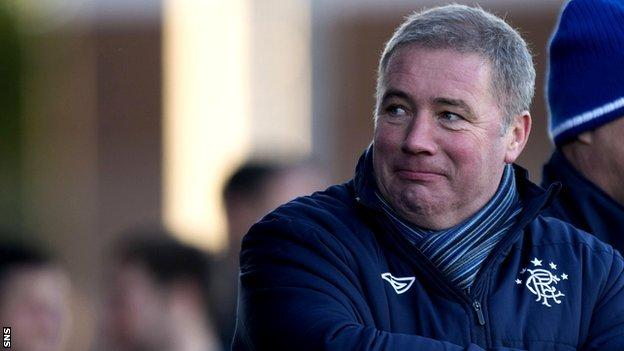 Rangers manager Ally McCoist is reluctant to lose any of his players in the upcoming transfer window.

The Ibrox club cannot add to their squad due to a year-long signing ban, although they can negotiate pre-contract agreements in January.

Unable to register players until September, McCoist is keen not to lose anyone, although he is aware that they may attract interest from other clubs.

"I would be hopeful we would continue with the squad we have," he said.

"It goes with the territory, there is no use worrying about it."

"We hope it won't be the case because we've got a small enough squad at the moment and it's been well enough documented that we can't bring anybody in.

"I would be disappointed to lose anybody. It's a bridge we would cross if we came to it but, at this moment in time, there is nothing happening."

McCoist also spoke of his anticipation of their Glasgow derby match against Queen's Park at Hampden Park.

"It should be a good day. It's a Glasgow derby and we are playing a team who have a couple of games in hand and who are sitting in a good position in the league," he said.

"We have already played them this season and they are extremely well organised and gave us a difficult game at Ibrox."