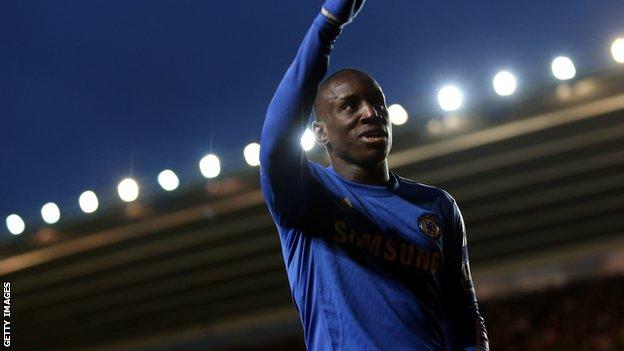 Demba Ba scored twice on his Chelsea debut as the FA Cup holders came from behind against Southampton to ease into the fourth round at St Mary's Stadium.

Victor Moses made it 2-1 and Branislav Ivanovic headed his team's third goal.

Ba added the fourth after Eden Hazard's pass before Frank Lampard scored from the spot.

Lampard's 83rd-minute penalty means he is now Chelsea's joint second-highest goal-scorer alongside Kerry Dixon, with 193 goals for the Blues.

Chelsea, four times winners in the past six seasons, are clearly in no mood to hand over the cup they won by beating Liverpool 2-1 in last May's final.

Chelsea have scored five goals in three of their last four FA Cup ties - against Southampton, Tottenham in last season's semi-final and Leicester City in the sixth round

Rafael Benitez made five changes to the side that started the surprise 1-0 home defeat to Queens Park Rangers on Wednesday and the visitors were forced to weather one or two uncomfortable moments before taking command at St Mary's Stadium.

But the London club, who entertain Swansea City in the League Cup semi-final first leg on 9 January, remain on course for a cup double after recovering from a poor start.

All eyes were on Ba, the £7m signing from Newcastle United.

And the scorer of 29 goals in 54 Premier League appearances for the Magpies quickly endeared himself to Chelsea's 4,592 travelling supporters with a committed performance.

This was only the Senegal international's second appearance in the competition - his previous FA Cup outing coming in a West Ham United shirt in February 2011.

He failed to find the net as the Hammers overcame Burnley 5-1 in the fifth round two years ago, but Ba had no such problems against Southampton, who are now left to focus on avoiding relegation from the Premier League.

The Saints, who had failed to progress past the third round only once in the previous 10 attempts, had taken a 22nd-minute lead when former Burnley striker Rodriguez finished with the outside of his right foot following a fine pass by Jason Puncheon.

But any hopes of a shock vanished when Chelsea scored twice in 10 minutes before half-time to turn the tie upside down.

Ba, who teased and tormented the home side's defence throughout, equalised when he got the last touch on the line to Mata's goalbound attempt.

Suddenly the European champions were revitalised.

Moses made it 2-1 on the stroke of half-time with a left-foot half-volley from a cross by Ashley Cole, chasing the eighth FA Cup winners medal of his career.

The second half was one-way traffic, Ivanovic making it 3-1 in the 52nd minute with a powerful header from Mata's left-wing cross before Ba wrapped up a highly satisfactory debut with Chelsea's fourth goal after flicking home Eden Hazard's ball.

It was left to substitute Lampard to wrap up an impressive Chelsea win when he scored from the penalty spot after Steven Davis was adjudged to have handled.

"We started the game brightly, scored a very good goal from Jay Rodriguez. It was a good game to watch from our point of view in the first half.

"There was some good football played and the big killer blow came for us on the stroke of half-time with the goal they've gone and scored.

"It is fair to say in the second half, Chelsea demonstrated the good players they've got in the team and to give them credit I thought they were very good and took it away from us."

"Demba Ba was really good in terms of everything he did. It was nearly perfect.

"It is important for us to have another option and he has been great today. I can decide now whether to play one or the other or both."

On Lampard becoming second-highest goal-scorer alongside Kerry Dixon: "It's a great achievement for him and hopefully he can score a lot of goals until the end of the season.