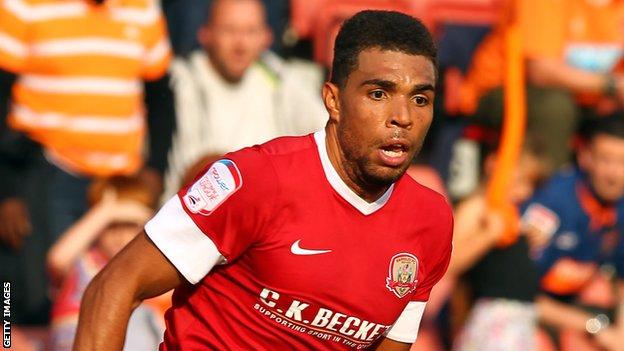 Rose, 19, netted the winner for the managerless Tykes just three minutes after coming on as a substitute.

The Clarets looked set to hold out for a hard-earned replay after playing a large portion of the all-Championship match with 10 men.

Barnsley won the FA Cup in 1912, beating West Bromwich Albion 1-0 in a replay.

Brian Stock was sent off for his second bookable offence after 36 minutes.

An uneventful first half-hour was punctuated by Stock and Marlon Harewood tangling in an off-the-ball incident which saw both players booked as result.

Burnley were then reduced to 10 men eight minutes before the break when Stock earned a second yellow card for a late challenge on Jim O'Brien.

Barnsley took full advantage of the extra man as they dominated possession after that, but were let down by poor finishing.

Stephen Dawson dragged his shot wide before the midfielder failed to make the most of another chance when he fired over following some patient build-up play on the left.

It looked as though a replay was going to be needed to decide the tie but the winning goal finally arrived in the 85th minute.

David Perkins's free-kick was pushed onto the bar by Brian Jensen and substitute Rose was on hand to bundle the ball into the net.

Barnsley caretaker manager David Flitcroft said: "We deserved the result, there's no doubt about that.

"I was made up for Danny Rose getting the winning goal, he's somebody who will score goals for this football club and today he's got a real important one.

"This boy, once he grows into his body, he's going to be some player and some goal-scorer for this football club."

Burnley boss Sean Dyche said: "It was inflicted out of our hands today.