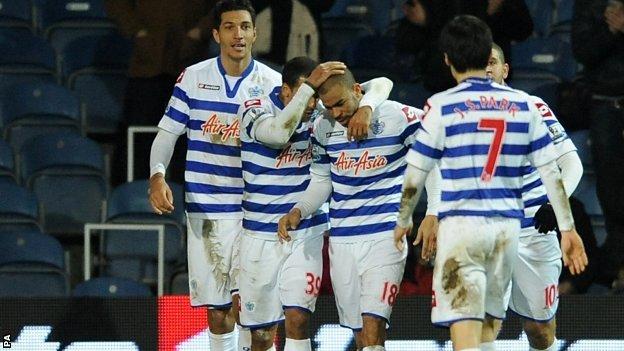 Kieron Dyer scored with virtually the last kick of the game to earn QPR an FA Cup third-round replay with West Brom.

The midfielder scored his first goal since 2007 with a left-foot shot to cancel out Shane Long's 79th-minute strike at Loftus Road.

Long stroked Albion into the lead with a deflected 12-yard effort after George Thorne broke into the box and the home defence failed to clear.

Cesar smothered a turn and shot from Romelu Lukaku and then parried a point-blank header from the on-loan Chelsea forward.

Kieron Dyer scored his last competitive goal in the Premier League against Newcastle in a 1-1 draw at Watford on Sunday, 13 May 2007

The QPR stopper also held a 25-yard strike from James Morrison and saw another Morrison six-yard effort fly wide, while Lukaku's thunderous attempt also went wide as the visitors enjoyed the better of the chances.

However, Stephane Mbia skimmed the crossbar for the home side and DJ Campbell, who was starting after returning from a loan spell at Ipswich, wasted a free header from 10 yards out.

West Brom looked the more likely to score, though, and went close when Jerome Thomas, on as a first-half substitute for Marc-Antoine Fortune, who himself had earlier come on for Zoltan Gera, beat three defenders before his left-foot shot was saved by Cesar.

But Long's crisp shot deflected in off Nedum Onuoha to put Albion ahead in front of a sparse 8,984 crowd in west London, before Dyer's late strike kept QPR in the hat for round four and set up a replay for Wednesday, 16 January at the Hawthorns.

"It was a bit late but it was a good finish from Kieron. He got through a full game which was good. He's kept going. He hasn't played a full game since I don't know when.

"I didn't want to get beat. It was important to stop getting beaten. The draw today, following the win against Chelsea, is not bad."

On the low attendance, Redknapp added:

"People want to see Premier League football. Maybe the sales were more exciting for them than QPR and West Brom today. You'll find lots of clubs with attendances down."

"We are a fraction disappointed with a replay but we'll take them back to the Hawthorns and have another go.

"Kieron Dyer is an old friend of mine and he popped up with a good goal.

"Good luck to him, I hope he can carry on for a few years yet. He gives his heart and soul every game."