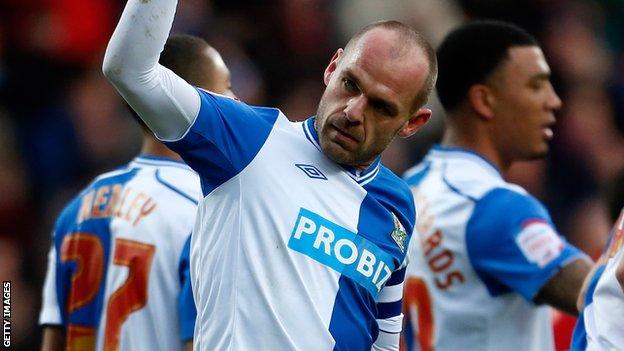 Blackburn earned a third straight win since the sacking of Henning Berg with a comfortable FA Cup success against Championship rivals Bristol City.

City rarely threatened Rovers stopper Jake Kean as the six-time winners cruised into the fourth round.

Bowyer and head of youth Terry McPhillips were told they would stay in charge of first-team affairs until the end of January following impressive wins over Barnsley and Nottingham Forest.

Struggling City, who are second bottom of the Championship table, presented few obstacles to the pair clinching a third successive victory in front of a sparse Ewood Park crowd of 5,504.

Blackburn were sharply out of the blocks and, after Diogo Rosado narrowly failed to connect with a dangerous cross from right-back Adam Henley, Murphy fired them ahead.

The former England international collected a loose pass from Mark Wilson, advanced towards the City area and lashed a rising shot from 25 yards that caught out goalkeeper Heaton.

The visitors looked for a swift response and former Rovers striker Jon Stead might have done better when Ryan Taylor headed Wilson's cross back across goal.

They also threatened in first-half stoppage time when Kean had to be alert as Taylor nodded goalwards from Liam Fontaine's flicked header.

The early stages of the second half were largely low-key until Rovers extended their lead before the hour.

Murphy's corner was cleared as far as Ruben Rochina, who chipped towards Dann and the ball fell for his centre-back partner Hanley to bundle home.

Blackburn caretaker manager Gary Bowyer: "It was a great start for us and a good strike from Danny. Since myself and Terry (McPhillips) have come in and had to look after the team, Danny has been brilliant.

"His support for us has been magnificent and we can't praise him enough. His goal was good and he reminded the lads yesterday that he's won the FA Cup with Liverpool so he's been great for the lads and he's been great for us. We'd be daft not to call on his experience."

Bristol City boss Derek McInnes: "It didn't feel like a proper cup tie. It was strange, and I felt that we've gifted Blackburn both goals but certainly the first goal is crucial.

"We give the ball away in an area we know we have to handle the ball well because Blackburn are a counter-attacking team, and want to get you on the back foot.

"Certainly the goal they scored from, we should be dealing with. I felt second half, we made changes to freshen things up.

"We brought three substitutes on quite early but we lose a second goal from the second part of a set play and that's another gift. It's a messy goal. I don't think Blackburn have had to work too hard for both of their goals."