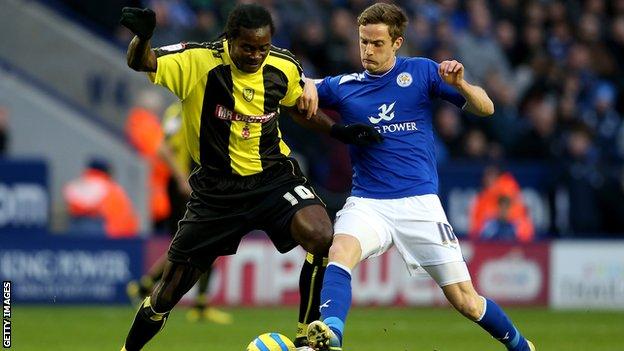 Leicester eased through to the fourth round of the FA Cup with a comfortable win over League Two side Burton Albion.

A third-minute volley from new signing Chris Wood put the Championship side ahead and Ritchie De Laet added a second from 10 yards before half-time.

Leicester had further chances, with debutant Marko Futacs hitting the crossbar and Michael Keane's header being cleared off the line.

But Leicester manager Nigel Pearson had a relaxed afternoon as his side advanced in a competition in which they reached the quarter-finals last season.

The Foxes went into the tie having not been beaten in the FA Cup by a team from the fourth tier since January 1986.

But Burton and their manager Gary Rowett had experience of winning at the King Power Stadium after beating Leicester 4-2 in the second round of the Capital One Cup in August.

The tie became even more tricky for the Brewers after they conceded an early goal.

A long ball into the box by Paul Konchesky sought out Wood and the former West Brom striker outmuscled Aaron Webster before guiding a right-foot volley into the corner of the net.

McGrath came close to a quick response but his curling effort from the edge of the box just cleared the crossbar.

The Championship club extended their lead after 21 minutes when the ball ricocheted out to the right-hand side where De Laet fired home from 10 yards out.

Futacs had chances either side of half-time to put the game beyond Burton, first steering a shot from Matty James' cross against the bar and then blasting over after neatly bringing down King's centre.

But Leicester keeper Kasper Schmeichel was also called upon, making saves from Weir in the first half and Zola in the second.

McGrath cleared Keane's header off the line after an hour to prevent the hosts adding to their tally.

"We got our fingers burned against Burton the last time so we didn't want a repeat of that.

"I wouldn't say that we came through without a scare because they always say that 2-0 is a dodgy scoreline but the first goal was very important for us and after that the boys went about their jobs in a very professional way.

"We restricted Burton to very few opportunities and it was also good to keep a clean sheet.

"There is nothing wrong with having a good cup run. We knew it was going to be a tricky tie so we are pleased to be through to the next round."

"It was the not the greatest start. It was important that we weathered that early storm, so to concede after only three minutes leaves you with an absolute mountain to climb.

"But you can't go stupidly forward because you then risk conceding two or three more goals. But when the second goal went in it makes it that much harder.

"To hope to do it twice at Leicester was always going to be difficult. You look at Leicester's team and think they could get five or six if you go at them. They are a terrific side and I hope they can get up into the Premier League."