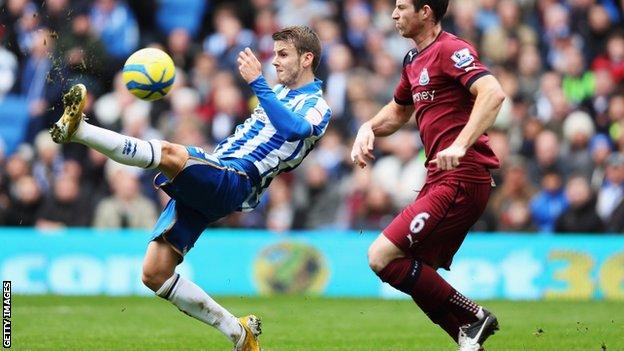 Championship side Brighton knocked 10-man Newcastle out of the FA Cup for a second straight season to heap more misery on Alan Pardew's squad.

Andrea Orlandi scored a delightful opener after the half-hour mark before the Premier League Magpies suffered a further setback when Shola Amoebi was sent off for a second bookable offence.

Newcastle offered little as they fell to a seventh defeat in eight games.

This was an impressive victory for Brighton, a result that will add to the optimism that surrounds this upwardly mobile club and strengthen their resolve to host Newcastle in next season's Premier League. The cool passing game of Liam Bridcutt at the heart of their midfield was tremendous.

But this was another dark day in what has become a chastening season for Newcastle. It is the third season in a row the Premier League side have been knocked out of the FA Cup by lower league opposition and the fourth successive time they have lost to Brighton in the competition.

Nine defeats in 11 league games has done little to encourage harmony at St James' Park, while the departure of Demba Ba and injuries to key players have undermined the club's efforts to build on last season's success.

Long before kick-off, this tie bore all the hallmarks of a third-round upset. Newcastle had an unfamiliar look, and not only because of their burgundy shirts, having been forced to name a side lacking Fabricio Coloccini, Papiss Cisse, Yohan Cabaye, Steven Taylor and a string of other leading names because of injury and absence.

With only 13 league places separating the sides, Brighton sensed a chance to repeat last season's fourth-round victory and went for the jugular from the off.

Sharper to the ball, and swifter to make use of it, the Seagulls toyed with their more celebrated opponents for much of the opening 45 minutes, producing some stylish attacking moves while tackling, battling and dominating territory in their uncomplicated and effective way.

They might have snatched the lead after eight minutes, when Gary Dicker forced James Perch to head off the line from Lopez's right-wing cross. Lopez himself threatened again moments later, stinging Rob Elliot's palms with a fierce drive from wide on the right.

It took 20 minutes for the visitors to find their feet, but just as they appeared to be gaining a measure of control, Brighton scored.

A rejuvenated Wayne Bridge surged down the left flank, gathered Gordon Greer's raking 50-yard pass and crossed for Orlandi, who flicked the ball up with his left foot and delightfully fired home with the outside of the same boot.

Pardew threw Nile Ranger and Paul Dummett on at half-time but his side's prospects of turning the tide looked remote even before referee Lee Probert showed Shola Amoebi a second yellow card for a foul on Lopez.

But with a reviving Newcastle pushing on, Brighton landed the decisive blow. Lopez broke into space and found Hoskins with a glorious through-ball, and the substitute beat the offside trap and slid the ball home to spark jubilant scenes on the south coast. Lightning had struck twice.

Brighton manager Gus Poyet: "It was all down to my players.

"They realised the opportunity and we were lucky that Newcastle couldn't bring their best players but we had to take advantage and we did.

"With all respect to them today, when you have a team Coloccini, Cisse, Cabaye they are ten times better than you. But today we were equal in general play and that was advantage. We didn't create too many chances today but we were a good team to play against a Premier League team."