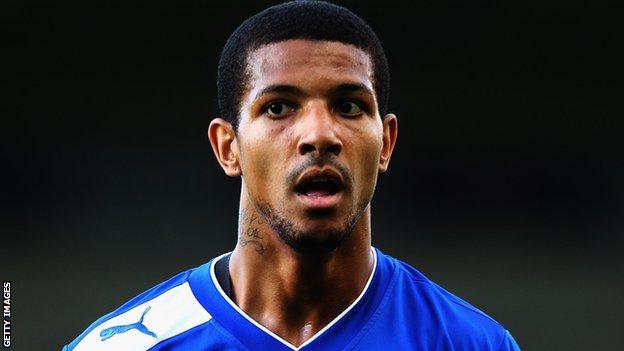 Jermaine Beckford's early strike sealed Huddersfield's progress to the FA Cup fourth round at the expense of fellow Championship side Charlton.

On-loan striker Beckford, back in the starting eleven after he was ineligible for the 6-1 drubbing by parent club Leicester, slid in Adam Clayton's pass.

Charlton played most of the second half with 10 men after Dorian Dervite was shown a straight red card.

The victory ended a run of 10 games without a win for Simon Grayson's men.

Clayton picked out the striker inside the area and, with Charlton back-up goalkeeper David Button rooted to his line, Beckford had time to pick his spot and rifle home.

The hosts, currently two places above their visitors in the Championship table, offered little in the first half but almost fashioned a chance when Bradley Wright-Phillips' cutback was blocked.

Huddersfield were creating most of the opportunities and James Vaughan saw a goal disallowed by the offside flag before Button denied the same player from point-blank range.

Beckford continued to have a telling impact in the second half and he was hauled down by last-man Dervite, who was subsequently dismissed for the trip.

But his dismissal seemed to galvanise the hosts, with Salim Kerkar's curling free-kick finally forcing Town goalkeeper Alex Smithies into a save.

Huddersfield failed to make their man advantage count and Yann Kermorgant missed the target with a header as Grayson's men held on.

Charlton manager Chris Powell: "To say I'm frustrated is the understatement of the year. I'm not enamoured with what happened today.

"I know we went down to 10 men but we went out with a whimper.

"It was a poor goal for us to concede and it gave us a mountain to climb. I'm not happy with the way it has panned out."

Huddersfield coach Ian Miller: "Today we played as a team. There were some good individual performances but it was about the team performance.

"Jermaine Beckford can score goals. He's a natural goalscorer. I knew him from his time at Leeds and when he's smiling and happy, he's a threat.

"Lately, he's just not had enough games due to injuries. But if you can get him and James Vaughan on the pitch they are a potent threat. The best in the Championship? I don't know.

"There's lots of teams spending mega money but they will certainly do for Huddersfield. They will both score goals."