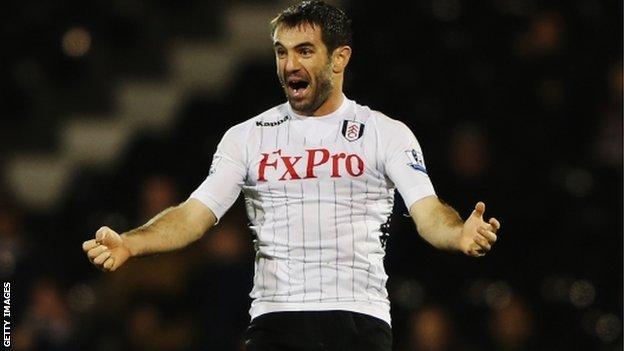 Giorgos Karagounis earned an FA Cup third-round replay for Fulham against Championship side Blackpool with a stunning 25-yard half-volley.

The Greek midfielder lashed in after Blackpool could only clear a Bryan Ruiz corner to the edge of their own box.

Ludovic Sylvestre had put Blackpool in front, drilling in a low 18-yard shot after Nathan Delfouneso cut in from the left and teed up the midfielder.

Ruiz came closest to winning the tie but his header hit the crossbar.

There was also time for second-half substitute Hugo Rodallega to miss as the Cottagers failed to see off their lower-ranked opposition.

This season marks the 60th anniversary of one of the most celebrated FA Cup finals of all time.

Stan Mortensen scored a hat-trick as Blackpool beat Bolton 4-3 at Wembley in 1953 but the final is best remembered for Matthews inspiring his side to win from 3-1 down with 22 minutes remaining.

Blackpool keeper Matt Gilks was in fine form, tipping a 20-yard Ruiz free-kick around the post, although he could only watch as Ashkan Dejagah diverted Alexander Kacaniklic's drilled cross the wrong side of the post.

The visitors carved out chances of their own with Liverpool target Thomas Ince testing David Stockdale from close range before firing in a low drive that the home keeper was also equal to.

Fulham upped their tempo after the break but it was Blackpool who took the lead.

Delfouneso, who had just had a penalty appeal turned down, cut in to the left edge of the box before picking out Sylvestre who rifled a low shot into the bottom corner.

Fulham boss Martin Jol sent on Kieran Richardson and Kerim Frei but it was a moment of class from Karagounis that saved his side.

The Greek controlled Blackpool's clearance from a corner before smashing a dipping half-volley in off the underside of the crossbar - his first goal for Fulham - to set up a replay at Bloomfield Road.

"[Karagounis] has been in the team over the last three games and I told him he could play 60 minutes today because he played the other games.

"I had to leave him on and I think he's not only a legend in his country, but he's a warrior for us.

"If you've seen him on You Tube, he probably did it [scored goals like today's during his career at Inter Milan, Benfica and Panathinaikos] eight or nine times before, and he's capable of doing that."

"It was their strongest side, so I am pleased to come away and still be in the hat and have the chance to bring them down to the Bloomfield Road cabbage patch.

"It is as bad a surface I have ever seen in the league. I don't think Fulham will be comfortable or enjoy playing there."