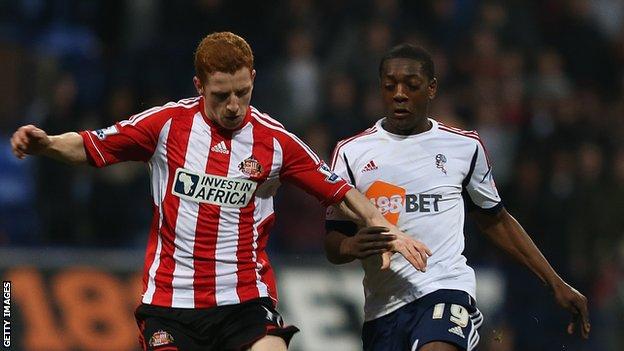 Sunderland battled back from two goals down to force a third-round replay against Bolton in the FA Cup.

Lee Chung-yong intercepted a pass by Carlos Cuellar to fire the hosts in front and Marvin Sordell's close-range header doubled the lead.

Craig Gardner completed the comeback with a stunning 20-yard drive.

Sunderland had to call upon all of their resolve to avoid an upset against a Bolton team currently 16th in the Championship, and keep alive their hopes of lifting the FA Cup again - 40 years on from their famous win over Leeds at Wembley.

Around 5,000 travelling fans, buoyed by news of Newcastle's demise at Brighton earlier in the day, were in full voice from the start of the game.

But their mood would soon be dampened by Bolton's opening goal, which came courtesy of a catastrophic error by Cuellar.

Bolton have now failed to beat Sunderland in any of their last nine encounters, a run that stretches back to November 2008

The Spaniard, one of eight players to retain his starting place following Sunderland's Premier League defeat by Liverpool on Wednesday evening, played a pass from the left touchline across his own 18-yard box to erroneously pick out Lee, who calmly rolled the ball into an unguarded net.

Fletcher headed narrowly over from a Sebastian Larsson corner, while Lonergan smartly kept out long-range efforts from Gardner and David Vaughan.

But the visitors appeared more disjointed as the first half went on, becoming increasingly frustrated at their inability to break down the Bolton defence, marshalled superbly by Darren Pratley and captain Keith Andrews.

A half-time team talk from manager Martin O'Neill failed to have the desired effect as the hosts went 2-0 up three minutes after the interval.

After goalkeeper Simon Mignolet failed to clear a corner, the ball was returned into the penalty area, where an unmarked Sordell was waiting to nod in his second goal for Wanderers.

Seconds later, Lonergan made a flying save to keep out Fletcher's diving header, and he repeated the trick on the hour mark, but Bolton's two-goal lead would prove to be short-lived.

Wickham, who had replaced the injured Cuellar moments earlier, pounced on a loose ball following a goalmouth scramble and fired in through Lonergan's legs from six yards.

The Black Cats pressed for an equaliser and came close again with headers from Fletcher and Wickham, before Gardner's superb strike levelled the scores.

A corner was cleared to the former Birmingham man, who was allowed time and space to control the ball and unleash an unstoppable right-footed shot high into the net.

Bolton's goal came under severe pressure in the closing stages, Titus Bramble coming closest with a header into the side-netting, but Dougie Freedman's men held firm to force a replay at the Stadium of Light.

Bolton manager Dougie Freedman said: "From a 2-0 lead I'm disappointed but overall I'm thrilled with the result because I thought we showed great commitment and desire at the end to defend for our lives.

"For the first 60 minutes I thought we controlled the game and we played a style of football I like to play.

"Overall, it was the old cliche of a game of two halves. It was a great tie to watch and in the end we had to dig in and defend - and that was part of the game."

Sunderland manager Martin O'Neill said: "It [naming just six substitutes] was not a point whatsoever, it is the way things fell.

"We couldn't change it much today because we couldn't fill the bench but we treat the competition with its proper merit.

"We had 5,000 people spend a lot of hard-earned money to come down and support us and they deserved better than we were serving up in the first half."