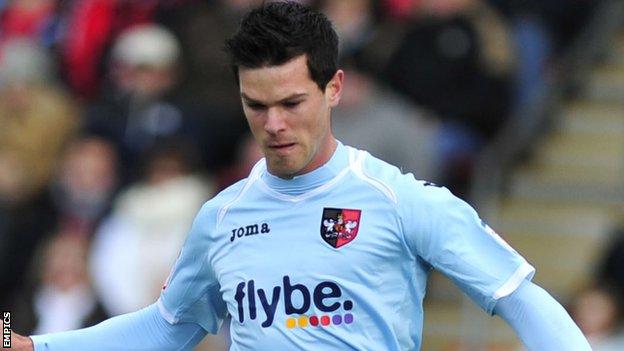 Exeter moved up to fifth in League Two as they beat York City to claim their ninth away victory of the season.

On-loan winger Alex Rodman diverted the ball past his own goalkeeper to give Exeter a 14th minute lead.

But Exeter's Jimmy Keohane scored his first ever goal, shooting under Michael Ingham to secure the win and send the Grecians into the play-off places.

"I'm disappointed. I don't think we deserved that, the players have worked so, so hard.

"I honestly think we've been excellent and first half today and I was gutted to go in at 1-1 to be honest.

"It's hard on us not to get anything out of this game today. I really feel that and I feel gutted for the players to be honest, because they've worked so hard."

"It was a slow pitch today, a bit wet, it was about covering the pitch, moving as a group and being close to the ball.

"It doesn't matter where we get our points from, every game is a winnable game.

"I changed the setup and covered the areas better, and the players worked tremendously hard.

"I'm very pleased we got through the second half and scored the goal."