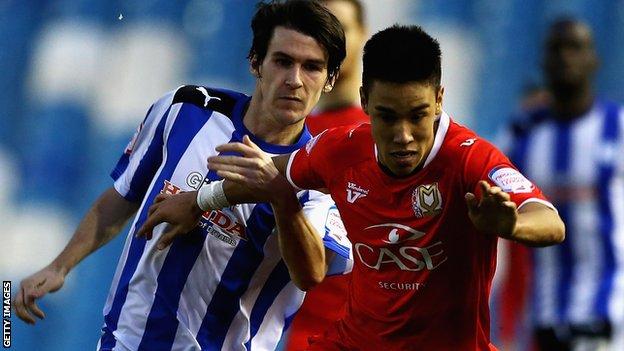 League One MK Dons earned an FA Cup replay against Championship strugglers Sheffield Wednesday, but the visitors will be disappointed not to have won.

Karl Robinson's side had a number of chances to win the third-round tie, with striker Shaun Williams hitting the post in the 85th minute.

Wednesday struggled to impose themselves on the game, with Mamady Sidibe missing their best chance.

The Dons, who are sixth in League One and beat AFC Wimbledon to reach the third round, started brightly and Lowe broke clear and forced goalkeeper Stephen Bywater into an early save.

Dons midfielder Darren Potter was running the game, but the Owls could have gone ahead when Chris Maguire's cross just evaded the onrushing Kieran Lee, before the same player brought a save out of David Martin moments later.

Sidibe had the first chance of the second half, but the on-loan Stoke striker decided to pass rather than shoot when well placed.

The match lacked a spark, but MK Dons took control in the closing stages with Harley having a long-range shot deflected behind before firing over from six yards with 10 minutes remaining.

Williams also went close to winning it for the visitors, forcing Bywater into a good save, before going even closer when his shot hit the post.

"It was just frustrating because you want to do well. One or two looked a little bit nervous and took a safety option rather than risking a little bit more.

"It was a hard-fought game and we're still in the tie, which is the important thing. If you're not going to win it, certainly don't lose it. You've still got a chance.

"We're disappointed but we've got another crack at it. As a player, you want to play. I don't adhere to the suggestion that we could do without another game."

"I think we deserved to win. I thought the way we played was very, very good. To come to this great stadium - which is steeped in history - and put in a performance like that was nice to see.

"We had a lot of cohesion and a lot of strength. I really was pleased, especially as I had a number of youngsters in the squad.

"I see certain managers having to tinker with their team to rest one or two players but I have to tinker with it to play them. It's not that I'm tinkering with the team, it's just that I've not got a lot of choice. I'm enjoying it because it's a wonderful challenge for me.

"We try to conduct ourselves in a classy way and I think as a football club we've done that today."