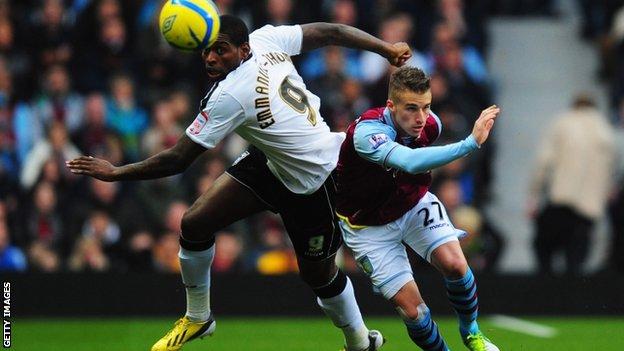 Darren Bent made a goal-scoring return for Aston Villa, firing in against his former club to spare Paul Lambert's blushes against a resilient Ipswich.

The Championship side had snatched the lead when Michael Chopra shot towards goal only for Villa's Eric Lichaj to steer the ball into his own net.

But Bent dragged Villa level after 51 seconds of the second half, driving a shot home from Charles N'Zogbia's pass.

Bent back in the groove

This was a welcome victory for Villa, who came into the game having failed to win any of their past four matches and without a goal at Villa Park in three home games.

While they remain just one point above the relegation zone in the Premier League, the FA Cup will provide a welcome distraction alongside their run to the semi-finals of the League Cup. Ipswich battled valiantly throughout but after a bright start, faded after half-time.

Bent did very little in the opening 45 minutes as Villa's record signing returned to the side after a five-game absence with a hamstring injury. His goal was his first since 30 September in a season where he has suffered the frustration of a series of injury problems and lost his place to Christian Benteke.

It was Ipswich who made the better start, threatening for the first time when Chopra was found in space by Jay Emmanuel-Thomas only to see his low drive parried by goalkeeper Shay Given.

Ipswich goalkeeper Scott Loach then produced a one-handed stop away to his left to keep out a powerful drive from Jordan Bowery after a flick-on by Bent and it proved to be a significant save as Chopra broke away to give the visitors the lead.

Villa have been able to rest a few players and Andreas Weimann's goal has seen them through. They have had a horrible Christmas period, but this result and the mid-week league Cup semi-final are definite positives for the club.

The former Newcastle striker cut into the Villa box from the right and his low shot flew into the corner of the net, thanks to a deflection off Villa defender Lichaj. Given produced a superb point blank save to keep out another Chopra effort at full stretch after he lunged at a deep cross from Aaron Cresswell.

Villa tried to retaliate and skipper Ciaran Clark's header forced a fine save out of Loach after he attacked a Barry Bannan corner. But the home side needed less than 60 seconds of the second half to draw level through Bent. The England striker finished in typically predatory fashion from 15 yards out from N'Zogbia's pass.

There was more urgency and a higher tempo about Villa's play and Patrick Kisnorbo deflected a shot from Bowery over his own crossbar and blocked an effort from substitute Agbonlahor. Joe Bennett was only inches off target with a dipping shot and Loach reacted quickly to turn aside Bent's effort on the turn.

Play was now confined mainly in the Ipswich half and Luke Hyam was booked for a foul on Stephen Ireland with nine minutes remaining. With seven minutes left Weimann guided a powerful header past the dive of Loach from Bennett's cross to break Ipswich hearts.

Ipswich boss Mick McCarthy: "When I came, the remit was to stay up and that has not changed. Maybe a replay would have got in the way but you don't like to lose and, when we were 2-1 down in the final minute, I would have taken a replay. I'm stewing about the goal we conceded just after half-time to bring them level.

"It changed the course of the game and, if you give them opportunities, they have the quality to make it count. But I was pleased with our performance as a whole."