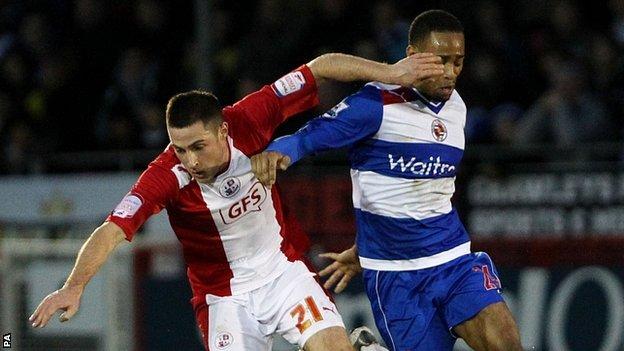 Adam Le Fondre scored twice as Reading came from behind to knock League One Crawley out of the FA Cup.

Crawley's Nicky Adams aroused hopes of a shock with a stunning strike from outside the area after just 14 seconds.

McCleary set up Noel Hunt to knock in the Premier League side's second and Le Fondre made it 3-1 from the penalty spot after Joe Walsh fouled Hunt.

Crawley had reached the fifth round of the Cup in the last two seasons but were facing a league side for the first time in their current run after victories over Metropolitan Police and Chelmsford City.

Fans of the Sussex side are used to giddy moments after back-to-back promotions and they were soon in raptures once more as Crawley scored within moments of the kick-off.

Adams robbed Reading captain Ian Harte of possession, cut in from the right and fired past goalkeeper Adam Federici from 25 yards.

Reading, showing seven changes to the side beaten 3-1 by Tottenham, were lucky not to fall further behind as Adams drilled another effort wide before Federici pulled off a spectacular save to keep out Joe Walsh's header.

The Royals got on level terms after their first spell of pressure as McCleary cushioned Harte's cross back to Le Fondre, who directed a first-time shot low past Crawley goalkeeper Paul Jones.

The outstanding McCleary was also the provider for Reading's second goal as he turned full-back David Hunt inside out and crossed for Hunt to slot home.

Reading gave themselves breathing space shortly after half-time when Hunt went down under a challenge from Walsh and Le Fondre blasted the penalty into the roof of the net.

Reading, FA Cup quarter-finalists in 2010 and 2011, saw out the clock to book their place in Sunday's fourth-round draw.

Crawley manager Richie Barker: "I thought the players were fantastic from minute one. They worked extremely hard, did everything I asked them to do and, who knows, with a little bit of luck and a correct referee's decision we may have come away with something.

"Today was about enjoying it - letting the players go and enjoy playing against some of the best players in the country, testing themselves and proving they should be playing at a higher level and for me they did that.

"I think the penalty had a major effect on the game. I think the referee has made a mistake, but I'll check the DVD to make sure, but if he's guessed it's too big a guess."

Reading manager Brian McDermott: "It was about coming and trying to get a result and do the basics as well as we could, which we didn't in the first 14 seconds.

"They had another chance to go 2-0 up, which would have been a real problem. It is easy to panic but we got ourselves back into the game. The reaction from our players was good.

"When we got ourselves 2-1 up it was more comfortable for us. I thought the combination of Adam and Noel was really good and Garath McCleary made a really good goal for Noel.

"We made a few changes but we put out a team we thought could win and that is what happened. It has turned out to be an okay day. I am pleased to be in the next round."