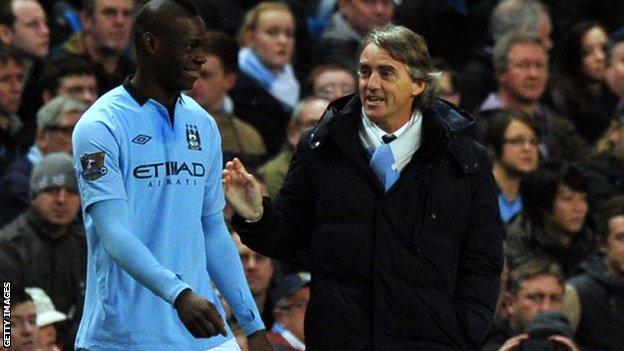 Manchester City put their midweek training ground troubles behind them by comfortably reaching the fourth round of the FA Cup at Watford's expense.

All eyes were on City after the apparent bust-up between manager Roberto Mancini and Mario Balotelli.

But a 25-yard free-kick from Carlos Tevez and a Gareth Barry header gave the home team a first-half lead and all but erased City's fears of an upset.

Lopes, nicknamed 'Rony' after the Brazilian forward Ronaldinho, only turned 17 last week and his goal, on his debut, put a smile back on Mancini's face after a stormy week for the Italian.

Man City in the FA Cup

Watford manager Gianfranco Zola, twice an FA Cup winner as a player, predicted his team would be dangerous opponents for the 2011 winners, especially considering their fine league record away from home.

The Championship side have won six league games on the road this season, scoring 27 goals in the process.

But a City line-up full of recognisable names were presented with few problems by the visitors - hardly surprisingly, given that injuries forced Zola to pick a weakened team.

Balotelli, the man who hogged the headlines during the week, started on the substitutes' bench, with Edin Dzeko and Tevez charged with leading City's attack.

And the performance of Tevez, last season's troubled striker, took the spotlight off his Italian team-mate.

Watford had spent the majority of the opening period on their heels and conceded the first goal when the Argentine superbly found the top corner from a free-kick.

Moments later, Watford missed their best chance of the match. Fernando Forestieri - on loan from Udinese - was played through one-on-one with Costel Pantilimon but the Romanian keeper dived low to his left to save.

The home side doubled their advantage before the break with Gareth Barry finishing off a lovely City move involving David Silva and James Milner.

It was one-way traffic after the break, Milner and substitute Balotelli going close before Lopes pounced on a rebound from Balotelli's shot.

Watford manager Gianfranco Zola: "I admit they deserved to win but the scoreline was a bit unfair.

"We put a lot of faith in our young players and they did so well for us. I believe it was the best team I could put out."

Manchester City assistant manager David Platt on goalscorer Marcos Lopes: "He should be proud of that and equally he should be ready to train on Sunday and he will be, with the under-21 team to play in their game on Monday.

"He's a good lad, he's got a very good temperament as well and he won't let that go to his head.

"He wants to hurt the opposition, wants to get in the box, and has been scoring goals like that for the under-21 team. He's got a good future ahead of him, certainly."