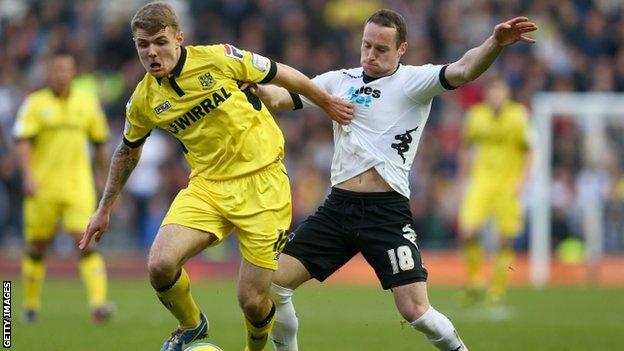 Teenager Mason Bennett scored the first goal of his career as a rampant Derby eased into the FA Cup fourth round.

The 16-year-old striker came off the bench to fire in the Championship side's fifth goal of a fine display.

Ben Davies poked in to give Derby the lead just before half-time before goals from former Wigan striker Conor Sammon and John Brayford made it 3-0.

Jeff Hendrick prodded in a fourth before Bennett rifled in from 18 yards to complete an emphatic victory.

It was a chastening afternoon for Tranmere, who were making their first appearance in the third round for three years. They started brightly, almost taking a third-minute lead only for centre-back Ash Taylor to head Andy Robinson's floating corner wide.

Rovers continued to create chances, with Derby goalkeeper Adam Legzdins having to hold on to a Donervon Daniels header from Adam McGurk's free-kick.

But visiting keeper Owain fon Williams put his side in trouble, three minutes before half-time when Paul Coutts's shot squirmed under his body and into the path of Davies, who was on hand to tap the ball into the empty net.

The Rams added a second nine minutes after the interval when Sammon blasted into the bottom corner from 12 yards. And they sealed matters on the hour when Rovers failed to clear their lines and Brayford tapped in from close range.

Hendrick, making his first FA Cup start, added a fourth after some neat build-up play before Bennett illuminated the final minutes with a fierce shot that Fon Williams was powerless to stop.

"Mason's goal was the highlight of the day for me. He could have scored one when he made his debut at Middlesbrough and hit the bar so it was lovely for him to get one.

"It's good because I think the experienced lads on the bench all understand that although all of them could have come on, it's vital for the younger ones to come on and get experience.

"One of the challenges we had was to bring some of the younger players through for the first team primarily and if they make us a profit at some point, all well and good, but I think this is the best place for them at the moment.

"To be fair, I didn't think it was a 5-0. We took our chances and got goals we don't normally score when the ball is bobbing around in the six yard box which was pleasing. The first goal was important because it settled everybody down and we went in at half time with a big boost."

"The turning point for me was the first goal. I thought we probably edged the first half so to concede was disappointing for us. We were flat at half time but to be fair, the keeper has been fantastic for us this season.

"He's made some unbelievable saves and he feels deep down he should have saved it but I'm not going to criticise him. He'll come back and hopefully keep a clean sheet next week.

"The basic defending just after half time was poor and really, we gifted them three goals but I think we can take a lot of positives out of the first half.

"I didn't think 5-0 was a reflection on how the game was. The last time we got beat 5-0 we won three league games on the trot."