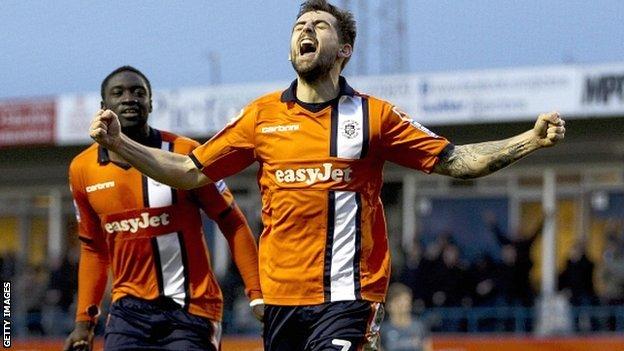 Non-league Luton Town secured a place in the FA Cup fourth round with a shock win against Championship side Wolves.

Alex Lawless was the home team's hero, while Wolves then sacked manager Stale Solbakken hours after the match.

Wolves were punished when defender Kevin Foley messed up a clearance, allowing Jon Shaw to head down for Lawless to volley home on 46 minutes.

Four-time winners Wolves created little in response as the Hatters deservedly ran out as surprise winners.

Despite the 59 league places between the teams, Blue Square Bet Premier play-off hopefuls Luton always looked comfortable against a Wolves outfit with only three wins in 17 outings.

Luton started positively by pressing at every opportunity and JJ O'Donnell fired over from 18 yards before Kevin Doyle shot wide at the other end.

The home side had a great chance to take the lead when Wolverhampton-born Andre Gray - released by the Black Country club as a teenager - raced clear only to have his shot saved by Wolves keeper Carl Ikeme.

Town's Jon Shaw flashed a chance across goal and won a throw-in at the start of the second half from which Luton scored their decisive winner.

Wolves defender Foley failed to clear and Shaw headed down for Lawless to volley into the bottom corner.

Luton remained on top and O'Donnell drilled over before Wolves's Christophe Berra headed against the top of the bar.

O'Donnell was carried off on a stretcher after receiving lengthy treatment following a kick to the head by substitute Slawomir Peszko.

And despite nine minutes of injury time, during which Tyler tipped over from Jamie O'Hara, the Hatters held firm for a famous Cup win, which proved to be the final straw for Solbakken.