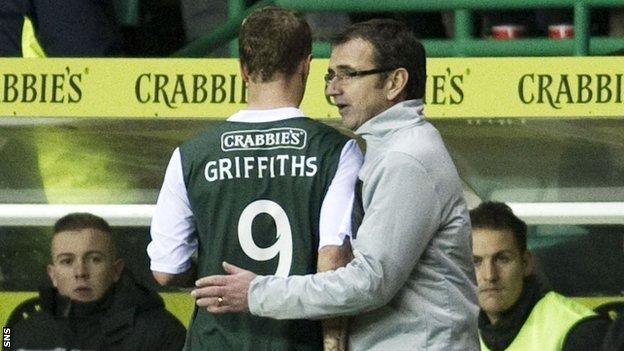 Manager Pat Fenlon admits his bid to keep on-loan striker Leigh Griffiths at Hibernian is no nearer a resolution.

Griffiths scored the only goal in the Scottish Premier League win over Celtic at Easter Road, his 14th of the season.

"We're no clearer. I've left it to the chairman and Wolves to get something sorted out," said Fenlon as the striker nears the end of his loan spell from the English Championship side.

"We'd love to keep him and he wants to stay, but it's out of our control."

Griffiths scored from a tight angle in the ninth minute to put Hibs in front and they survived a late onslaught to lift spirits at the club after last weekend's home defeat by Ross County.

"We've had some hiccups along the way and last week was one of them," added the manager.

"It's difficult to get to that level every week, but I thought we were magnificent today from start to finish and we deserved to win.

"I know Celtic put us under a lot of pressure in the second half, but I thought we had the better chances in the game.

"My two centre-halfs were different class and the goalkeeper behind them did really well for us.

"To a man, you have to take your hat off to them; their work-rate was fantastic.

"People were beginning to doubt us over the last few weeks and I am delighted for the players and the supporters."

Griffiths was replaced with David Wotherspoon with 18 minutes remaining at Easter Road and Fenlon acknowledged that, with Eoin Doyle playing in a wider position, he had never expected the goalscorer to last the full match.

"It's difficult, that role, on your own up front. We thought, if we got 70 minutes out of him, it would be a good shift for him," explained the Irishman.

"He took his goal really well. I am delighted for him."

Now fourth in the SPL, Fenlon hopes the players will be boosted by the result against the league leaders when they travel to the west of Edinburgh to take on Hearts on 3 January.

"We've got to take great belief and confidence out of that," he said.

"The key now is to rest them. We are looking forward to it.

"We've got to start going to Tynecastle and picking up something there. We haven't done that enough over the years. It's a big game for us.

"We know we are going to have to work really hard. Hearts are a decent side; they are a big, physical side.

On-loan Manchester City defender Ryan McGivern was missing against Celtic but could return for the Edinburgh derby.

"Hopefully Ryan might have a chance of being back for that," added Fenlon. "His hamstring is a bit sore, but he hasn't torn it or pulled it.

"But it will be difficult to change the team, I suppose."