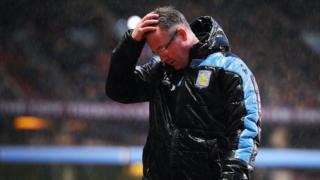 Villa fans left the stadium in a mass exodus after the third goal - the 15th consecutive goal conceded with no reply in three matches.

Lambert admits it's his "responsibility" to improve the team's performance, as the club slip to 17th in the Premier League table, just a point above the relegation zone.