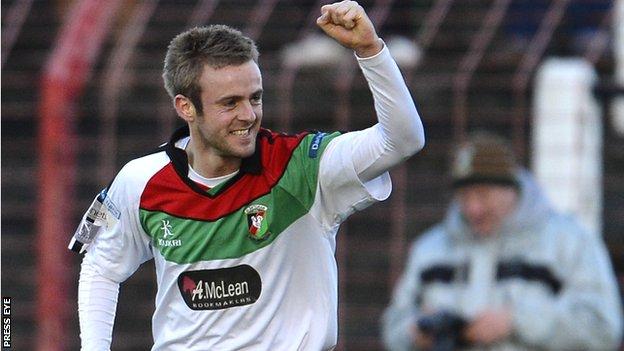 Glentoran are up to fourth in the Premiership after hammering lowly Donegal Celtic at the Oval.

Mark Burns and Mark Miskimmin missed the target with early DC chances before Richard Clarke volleyed home to put the Glens ahead on 26 minutes.

Jimmy Callacher's looping header made it 2-0 while Mark Clarke and Stephen Carson also found the target.

Miskimmin struck the bar with a penalty before Andy Waterworth converted his spot-kick a minute from time.

Callacher headed in on 33 minutes from Stephen Carson's free-kick as the Glens took a grip on the game.

Mark Clarke netted from a rebound in the 70th minute and the impressive Carson curled in the fourth just 15 seconds after the restart.

Paul McVeigh was fouled for the penalty which Miskimmin hammered against the woodwork in the 73rd minute.

Andy Waterworth made no mistake with his spot-kick, slotting in after Kevin Keegan brought down Jim O'Hanlon.

"After a sloppy start we got back in it and the first goal was vital," said Glens goalscorer Richard Clarke.

"After losing on Boxing day it was important to win and we got the three points with aplomb."