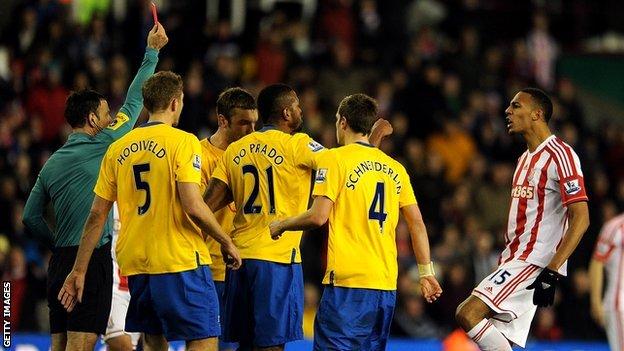 The Potters midfielder was shown a straight red for a challenge on Cork in the 3-3 draw at the Britannia Stadium.

"I was disappointed with the reaction of the player," said Pulis.

"Whether the reaction of Jack influences the referee, I'm not sure, but the lad [Nzonzi] certainly doesn't stamp on him"

"Whether the reaction of Jack influences the referee, I'm not sure, but the lad [Nzonzi] certainly doesn't stamp on him."

Pulis, who confirmed that City would appeal against referee Mark Clattenburg's decision, added: "There was no intent, he stepped over and planted his foot between Cork's legs."

A stunning 25-yard strike in the last minute from Cameron Jerome earned 10-man Stoke a point, completing a fightback from 3-1 down at half-time and preserving their 10-match unbeaten run.

"We were awful in the first half," said Pulis. "That's as bad as we've been. We were poor defensively and gave poor goals away.

"Southampton deserved their lead, we were still tapping ourselves on the back from the Boxing Day win over Liverpool," said Pulis.

"But, in the second half, and even with 10 men, I thought we were the team that could go on and score more goals."

Goals from Rickie Lambert and Jay Rodriguez - either side of Kenwyne Jones' equaliser - along with an Andy Wilkinson own goal had put Southampton on course for only their second away league win of the season.

Saints had the chance to wrap up the points only for Guly do Prado to miss an open goal from the edge of the penalty area.

Stoke have now gone 17 games unbeaten at home in the league - their last Premier League defeat at Britannia Stadium was 1-0 versus Sunderland on 4 February.

Manager Nigel Adkins identified that as a key moment, but refused to criticise his players for missing out on victory.

"It's a fantastic point to get away from home," said the Saints boss. "Stoke had only conceded four goals at home this season and we've come and scored three.

"The players have been top drawer today and, in the end, Stoke needed a wonder strike to get that equaliser.

"For us to come away from home and play like that at Stoke is great credit to the players."

Adkins said he had not seen a replay of the incident that resulted in Nzonzi being sent off, but he had been told that the red card was warranted.

"I'm led to believe it is a red card, but I know Tony is spitting feathers saying it's not," continued Adkins.

"From where I was in the dugout, I couldn't tell, but obviously Jack was rolling around."