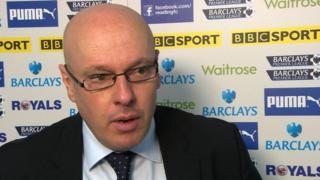 Reading manager Brain McDermott says his side have discovered what it takes to get results in the Premier League, after beating West Ham 1-0 at the Madejski Stadium.

McDermott admits his side have had to compromise their desire to go out and attack teams in favour of a more resilient approach, which brought a 0-0 draw against Swansea on Boxing Day and now their second win of the season against the Hammers.

Reading are 19th in the table and will look to carry on their run against Tottenham on New Year's Day.